A few hours ago, MACH22 posted the following Facebook message: “It is with deepest regret to inform you that bassist Jaron Gulino has decided to leave MACH22. We had an incredible 3 years with Jaron and wish him nothing but the best.” 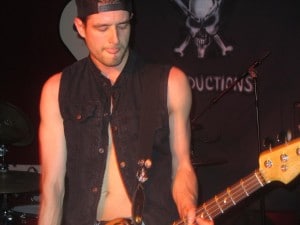 Sleaze Roxx’s review of MACH22‘s recently released EP Like My Chances states: “Mach22 have called their sophomore EP Like My Chances. I like their chances too because quite simply, Like My Chances is a phenomenal record. The Philadelphia based band proves that playing uncomplicated classic rock and roll with a whole lot of soul is an art that many attempt but few are able to master. And master this art, Mach22 certainly accomplish on Like My Chances! Man, where do you start? This is such a good record.”

In an interview with Sleaze Roxx a couple of months ago, MACH22‘s frontman and band founder, Lamont Caldwell, commented on Gulino being in two bands at the same time: “With Jaron, On Top was a project that he already had before he joined the band so the way I look at it, I think that it would be really unfair for him or for me or any other guy in the band to be like “You know what. You’re in our band. You got to stop this other band that you are doing.” Because the thing is it’s like a network. It’s just the way it is. No one sees it as a take away from what we are doing. In a way, it’s sort of like Myles Kennedy is with Slash but he also still has Alterbridge. You can balance it if it can be balanced. Now you can get a situation where both albums come out at the same time and you are going to have to juggle times and things like that. But you know, it’s not a problem at all and it is one of things that keeps him happy because it is part of his passion. Like I said, that group is something that he started before he joined the band so he is definitely passionate about that so it is a good thing that he has that and he can do what he does.”