Mach22 to open for Bon Jovi in Philadephia, Pennsylvania, USA on March 31st 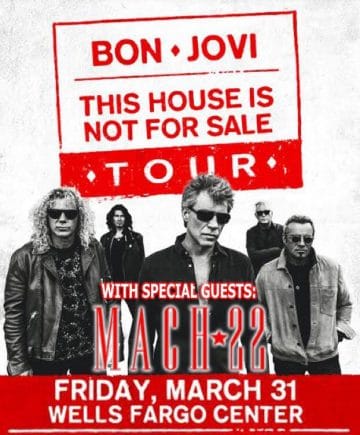 Mach22‘s Like My Chances EP was the number one album on the Sleaze Roxx’s Top Ten Albums of 2015. Sleaze Roxx stated in that regard: “Mach22 have proven that playing great rock n’ roll does not have to be complicated. Mixing classic guitar riffs from the son of Cinderella‘s Jeff LaBar (Sebastian LaBar), a strong rhythm section, the soulful vocals of Living Colour‘s Corey Glover reincarnated Lamont Caldwell and a willingness to take a few risks on certain songs like Van Halen would do in their prime turns out to be a winning formula. Mach22 are definitely the beneficiaries of Sleaze Roxx opening up its albums of the year list to shorter EPs given that there are only six songs on Like My Chances. The sky’s the limit for Mach22….”

Speaking exclusively to Sleaze Roxx, Mach22‘s drummer Damian MonteCarlo (who did a full-length interview back in late January 2017) commented last week on how the band found out about securing the opening slot for Bon Jovi: “We found out about it the other day. [Mach22 bassist] Jaron [Gulino] sent us all a text in our band group text and said “We Won!” I think we were all kind of stunned by it. It sunk in a little more when it was officially announced on Bon Jovi’s website. I feel like I’m walking on air man!” 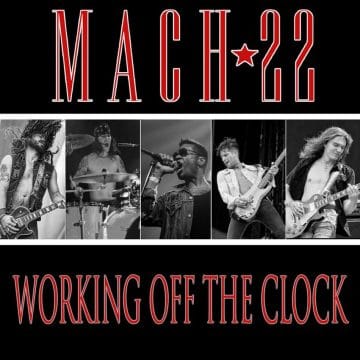 was like the first Rocky movie, and this Bon Jovi gig is our Rocky 2!” 

Mach22 just released a three song EP entitled Working Off The Clock back in January 2017 to which Sleaze Roxx stated in its review: “Mach22 come back a little heavier and faster with their three song offering on Working Off The Clock. Just like with Like My Chances, quality is favoured over quantity. All three songs are solid although I definitely can pick my favourite track to least favourite one quite easily. The best song hands down is the opening track “Get Away” which eventually kicks in with a quick guitar riff and then never lets up. With such a heavy riff barrage, it takes some strong pipes to be heard over that and Caldwell luckily is more than up for the task. The man simply is a phenomenal singer constantly reminding of the aforementioned Living Colour lead vocalist Corey Glover. “Get Up” is definitely the heaviest song on Working Off The Clock. “No Good News” is next and ends up feeling more like a bluesy jam song at times than anything else and especially at the end. It’s got some groovy moments but tends to lose me towards the end with the Led Zeppelin like or old ’70s bluesy rock section. Working Off The Clock ends with the “Stuck In My Head” which gets the video treatment and is a solid rocker. It’s not flashy but solid throughout and gets the job done.”