Big changes for Philadelphia, Pennsylvania, USA rockers Mach22 as the group is shrinking from five members to four, and long-time guitarist Sebastian LaBar along with bassist Jaron Gulino are no longer part of the band. LaBar and Gulino both play in post modern grunge rock band Tantric along with lead vocalist Hugo Ferreira and drummer Ian Corabi. Mach22 have replaced the duo with bassist Ahmed Smith. 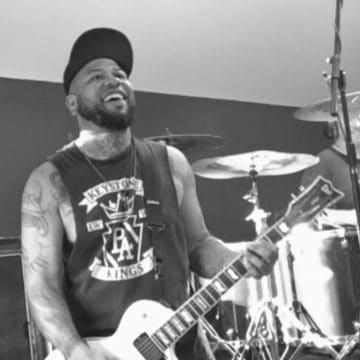 Mach22 have released three records thus far — Sweet Talk Intervention (2014), the EP Like My Chances (2015) and the EP Working Off The Clock (2017) — and LaBar and Gulino played on all three albums although the latter was out of the band for a period of time between the two EPs.

The band’s Like My Chances EP landed the #1 spot on Sleaze Roxx’s Top Ten Albums of 2015 to which Sleaze Roxx stated: “Mach22 have proven that playing great rock n’ roll does not have to be complicated. Mixing classic guitar riffs from the son of Cinderella‘s Jeff LaBar (Sebastian LaBar), a strong rhythm section, the soulful vocals of Living Colour‘s Corey Glover reincarnated Lamont Caldwell and a willingness to take a few risks on certain songs like Van Halen would do in their prime turns out to be a winning formula. Mach22 are definitely the beneficiaries of Sleaze Roxx opening up its albums of the year list to shorter EPs given that there are only six songs on Like My Chances. The sky’s the limit for Mach22. Unfortunately, bassist Jaron Gulino did not apparently think so as he parted ways with the band less than four months after the EP’s release. Whatever the case, Like My Chances is definitely worth checking out.”

Mach22‘s “Get Away” video (from Working Off The Clock EP):

Mach22 – Get Away [Official Video]