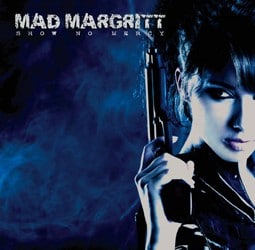 Perris Records is set to release Mad Margritt’s ‘Show No Mercy’ on July 16th. The album is the follow-up to the Atlanta rockers’ 2007 album ‘Animal’.

The nine song CD — including tracks such as “I Can’t Get Enough”, “Down In Flames” and “Only In My Dreams” — is available for pre-order at www.perrisrecords.com and many other retail stores. The album will also be available soon for download on iTunes and Rhapsody. If you don’t want to wait until July 16th you can buy an advance copy directly from Mad Margritt at www.madmargritt.com.

To help promote the new CD, Mad Margritt and Big Cat Love Productions are teaming up to put together a 20 city tour across the USA. The first date to be confirmed is July 6th at the Roberts Arena in Sarasota, Florida with Saliva and Candlebox with more dates to be announced soon.

Mad Margritt consists of Eddie Smith (vocals/guitar), Carl Culpepper (guitar), Skip Mullis (bass) and newest member Brandon Faulkner (drums). ‘Animal’ was released through Perris Records in 2007 and was called a “great sounding straight-forward rock album that would have been right at home in the music scene of 1989” in a SleazeRoxx.com review.