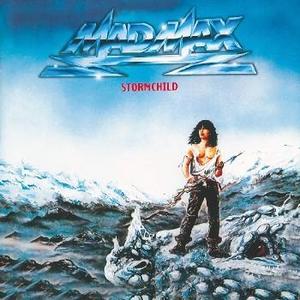 Mad Max debuted on the German metal scene in 1982, delivering a brilliant combination of hard rock and heavy metal. Throughout the years the band managed to record eight full-length albums and one EP, with each release proving their amazing musical skills. This exclusive set of re-released early Mad Max albums – “Mad Max”, “Rollin’ Thunder”, “Stormchild” and “Night of Passion” – brings back one of the most underrated German rock legends ever to walk the face of this planet…

“Rollin’ Thunder”
The group’s second full-length album (and first for Roadrunner Records) saw the light of day in October 1984, instantly gaining a lot of success on the European rock scene. As the LP received more and more excellent reviews, the label decided to release it in the U.S.A. “Rollin’ Thunder” was eventually picked “album of the year” by the American heavy metal magazine Iron Planet.

“Stormchild”
Mad Max released their third LP in 1985, showcasing a great musical progression. The album received great reviews in the British music press (especially in Kerrang!) and soon the band decided to organize a small tour across the UK. The tour turned out to be a great success, ending with a sold-out show in London’s Marquee Club. New edition includes a bonus track.

“Night of Passion”
Re-release of their fourth studio album from 1985. The album proved to be a very valuable work and once again the band met with warm reception from critics and fans (the LP was in the Top 10 of Germany’s best selling rock albums). New edition includes a bonus track.