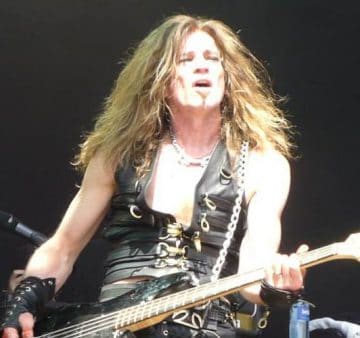 All Music/All Bands asked Doliber about the time that former Skid Row frontman Sebastian Bach was in the band and what memories does he have in that regard. Doliber stated: “Sebastian was a very talented good looking kid, I taught him everything I knew about the Business of being a Rock Star. We had some very good times and some very hard times. Crossing from Canada to the U.S.A. was a challenge. Baz met us in Windsor with full hair and wearing his Rock Star garb, Maxine and I were dressed down and desperately trying to look normal. The border guard didn’t buy our story and sent us back to Toronto. So we went into plan B, I wanted and swim back across to the US at the narrowest spot. But Max and Baz suggested we try another crossing area with a different story. Fortunately for everyone that idea worked.”

In terms of how the new album Monstrocity will differ from Madam X‘s previous albums, Doliber stated: “Monstrocity is a band collaboration. Some songs were written by a single member or members inputting ideas until the final mix. Most songs were completely recorder many times. each time a slight transformation took place until the final out come. On the “We Reserve The Right” album I was the primary writer, I think I wrote or co wrote 9 of the 12 songs on that record. On the “We Reserve the Right” record we spent 4 weeks writing and another 4 weeks recording and spent 100,000,00. On “Monstrocity” we spent 100,000,00 and a year to record, we made demo’s of 30 or more songs , some really great songs that didn’t make the record . As time went on Max and Rox started to contribute to the writing process and put on the producers hat and made some executive decisions . I’m not saying I agreed to them all, I hate not having my way, But this is a band and not my solo project.”

You can read the rest of the interview with Doliber at All Music/All Bands.

Turn this Halloween into Metal-screams with the new Madam X release MONSTROCITY!So come a little closer and take a look insideWe got some candy for your ears…