Austrian sleaze rockers Mädhouse consisting of lead vocalist Tommy Lovelace, guitarist Mikky Stixx and bassist Rickey Dee along with new members Thommy Black (guitar) and Casey J. Eiszenman (drums) will be releasing their sophomore album Shemale Kung Fu in the spring of 2021. Shemale Kung Fu is the follow up to Money Talks Bullshit Walks, which was released in September 2019. 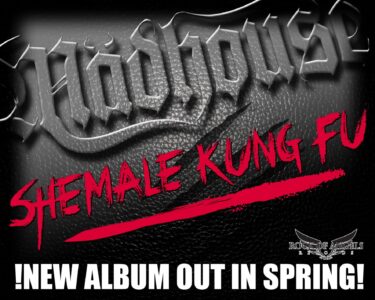 The following message was posted on Mädhouse‘s Facebook page yesterday:

We have finished the recordings for our new album “Shemale Kung Fu” and we gotta tell you it´s a monster!! 16 songs of banging Glam Metal are waiting to get unleashed! Out in spring on ROAR – Rock of Angels Records!

““Boom Boob Shaker!” One listen of that song and I knew that I needed to acquire Madhouse‘s album Money Talks Bullshit Walks. The record did not disappoint and most likely qualifies as the sleaziest and raunchiest album featured on the Sleaze Roxx’s Top Ten Albums of 2019. I have to say that the Austrian sleaze group is still a bit of an enigma to me as I am not even sure whether the band employs one or two lead vocalists. Whatever the case, Money Talks Bullshit Walks rocks from start to finish, and reminds me a lot of last year’s debut album No Sign of Relief from The Cruel Intentions, which was touted by many as the “sleaze” album of the year. Interestingly, Madhouse released a video for their track “Hard ‘N Heavy” which I actually consider to be one of the weakest tracks — there’s none really but you know what I mean — on the album. Had Madhouse released a video for the title track or “Boom Boob Shaker”, I have a feeling that they would have caught on a little bit faster. In any case, I haven’t read one negative review about Money Talks Bullshit Walks and the reason for that is simple. The album kicks ass and never lets up.”