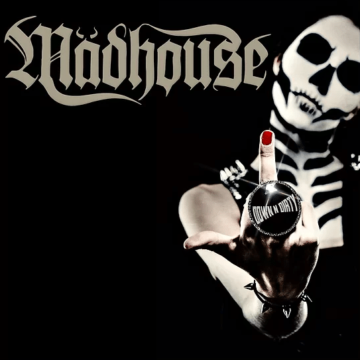 states the following about Mädhouse:

“Ain’t no crazy like Mädhouse! Their debut album “Money Talks, Bullshit Walks” is straight outta glam. Mädhouse‘s smokin’ hot shredding will remind you why hair metal still reigns supreme among rock genres. A gritty group of misfits from Vienna, Austria, Mädhouse  pumps out the real deal every. single. time. When 18 random rockers got together at the end of 2017 to put on a show called “Hard N’ Heavy” just for kicks, nobody thought a new band would be born. That gig ended up being such a blast that eight of them decided to keep jamming together. A few weeks later, they wrote their first song— appropriately “Hard N’ Heavy” —inspired by the epic night that brought them together. At that point they didn’t have a masterplan, or even a name for themselves, but they knew without a doubt they had all the parts to make a great RnR band. More importantly, they had that spark and just enough crazy among them to know it was legit. It took a few more months with some growing pains along the way to get it together and solidify a band of five. They may not have set out to become Mädhouse, but here we are. Whether it was hair metal destiny or some other twist of glam fate is hard to say. What is clear is that for them; it’s about the music and their shared love of cranking out original, quality, ass-kicking rock.”