Madman’s Lullaby consisting of lead guitarist Mr. Brett, drummer Eric Arbizu and bassist Luis Barillas have announced that they have parted amicably from their lead vocalist Chris Michaels. This announcement is coming just before the release of Madman’s Lullaby‘s new EP Nocturnal Overdrive Part 2, which will be available via MR Records on April 21, 2022. The group’s prior EP Nocturnal Overdrive Part 1 finished at #5 on the Sleaze Roxx’s Top Ten Albums of 2021. 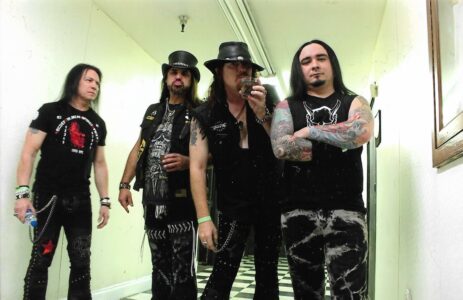 “OK enough time has gone by to say Madman’s Lullaby and Vocalist Chris Michaels have parted ways.. NO bad blood just life and during the early hard times of Covid, Chris and his wife made decision to move to Phoenix,AZ, was already in their plans for maybe 2022 but with Covid and all lock downs etc pushed it up….sadly there just is no real way to go foward together at that distance.. this post is NOT about the future but to Thank Chris for all of his contributions to Madman’s Lullaby 2016-2021…and we did a lot together..we wrote a lot of Great tunes together… recorded Sins of Greed CD 2017, Nocturnal Overdrive CD (split into 2 Eps because of Covid) Part 1 came out May 2021 and Part 2 comes out THIS month….we won the Hard Rock Cafe‘s Hard Rock Rising Battle of the Bands SF region 2017, played LA/Hollywood area like a dozen times with the likes of Dokken, Y & T, Lita Ford, Geoff Tate‘s Operation Mindcrime to name but just a few. We hit Denver Colorado May 2017 & July 2018, in Chicago, Il May 2018, Toured England and the UK Oct 2018, where supposed to do a tour in Australia early 2020 but alas Covid UGH. made hard to do anything since… We wish Chris nothing but good things in Phoenix and with the next chapter of his life.. Brett, EJ, and Luis weighing possibilities of maybe finding another singer.. will keep people posted,, Peace Mr.B“