California, USA rockers Madman’s Lullaby are back with an upcoming new studio album Sins Of Greed, which will be released via Melodic Rock Records on November 24, 2017 and a new video for their track “One Shot.” The video was shot, mixed and edited by May Yam. 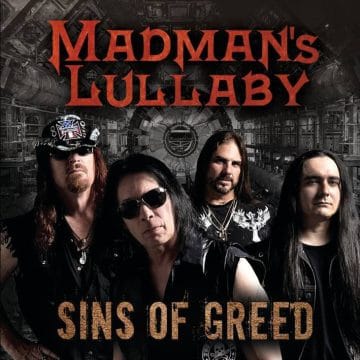 The group describes its history as follows on its website (with slight edits):

“Madman’s Lullaby hails from San Jose, Ca and has been rocking the Bay Area since 2007.. Founding member Mr.Brett on Lead Guitar and Eric Arbizu on Drums/vocals have been together since the summer of 2008. Lead vocalist, Chris Michaels and Bassist/vocalist Luis Barillas joined the band in late 2016. The band’s 2013 release “Unhinged” has received glowing reviews from all over and some early heard demos led them to be signed to East Coast Label Kivel Records in late 2013. The band has been called a cross between Lynch Mob/Badlands with a touch of Black Label Society.

In 2013, the band won SF Radio station 107.7 The Bone’s Local Licks contest and played the Shoreline Amphitheater with Bad Company, Lynard Skynard and Night Ranger and in July 2015 played at Vasby Rock Festival in Stockholm, Sweden with the likes of WASP, Michael Schenker, Danger Danger, HEAT and more.

Madman’s plays a heavy blues/hard rock but with lots of melodic hooks driving rhythms , soulful vocals, searing guitar leads, and thunderous drums..Get their latetest CD “Unhinged” and hear for yourself or better yet catch them at one of their high energy shows.”

The new single “One Shot” by Madman’s Lullaby on Melodic Rock Records.Video directed, shot and edited by May Yam. Visual effects by Gregory Annable. www.MYSt…