American female singer Madysin Hatter has released a video for her song “It’s All Good” from her album Lose Your Mind, which was released back on January 8, 2016. 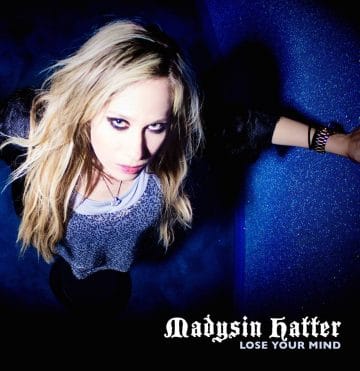 Madysin Hatter is a Rocker/Singer/Songwriter. Her distinct sound is a modern fusion of the classic hard rock of the 70’s & 80’s, raw rock ‘n’roll, and pop. Her music expertly blends the influences & vibes of rock’s heyday with the spirit of today. As a result, Madysin‘s jams “could definitely be played across mainstream rock radio” (Maria Mar, radio personality at WRAT and contributing writer for The Aquarian Weekly), while also appealing to rock’s new generation of fans.

Over the past year, Madysin has devoted every ounce of her being into completing her much-anticipated full length album of original material. Committing to recording “the old school rock way” (analog), this project has been quite a rewarding adventure! Madysin Hatter‘s new album “Lose Your Mind” released worldwide on 01.08.16. Shortly thereafter, Madysin released a music video for the first single off the album, “Lose My Mind”. Since it’s release, the album has been getting rave reviews and national recognition (see “Buzz” section of website).

A New Jersey native, the unfiltered, infectious energy of Madysin Hatter is best captured in her live performance. Throughout the past couple of years, Madysin has taken both the east and west coasts by storm– opening for such legendary rock acts as Buckcherry, Winger, Tom Keifer (of Cinderella), Kix, and Faster Pussycat…just to name a few!

Madysin Hatter continues to write and create new material, while also managing every aspect of her music, and writing her own “Song of the Week” column in Steppin’ Out Magazine, New Jersey’s #1 entertainment bi-weekly magazine. She also is a professional songwriter for other artists.

Buy song at https://itunes.apple.com/us/album/lose-your-mind/id1071997466 or www.MadysinHatter.bigcartel.com. The official music video for “It’s All Good”, o…