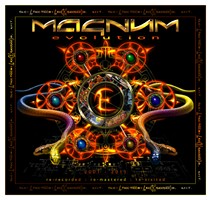 Magnum’s new best of compilation is a celebration of the last 10 years since the band’s reunion.

Hugely influential British melodic hard rock group Magnum are set to release ‘Evolution’ on Steamhammer/SPV on November 14th (November 11th in Germany, the end of November in USA and Canada). The CD comes in a high value ecol book, and the band have confirmed three exclusive UK dates in November/December 2011 to promote the release.

The line up of guitarist/songwriter/producer Tony Clarkin, vocalist Bob Catley, keyboardist Mark Stanway, bassist Al Barrow and drummer Harry James, have excelled themselves on ‘Evolution’, one of the strongest and most unusual best of albums in their illustrious (near 40-year) history to date.

‘Evolution’ contains eight songs from their previous comeback albums which were partial re-recorded and fully re-mixed, two from their much acclaimed ‘The Visitation’ album (which cracked the Top 20 in Germany and made it to #3 in the UK Rock Charts as well as high chart entries in Sweden and Switzerland) and two totally new recorded songs.