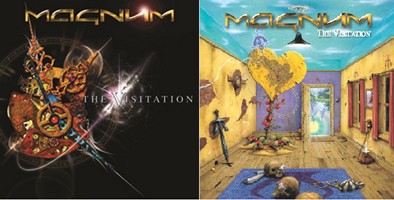 Magnum To Release New Album ‘The Visitation’ On January 25th

On a music scene which laments with increasing vehemence a lack of consistency and artistic standards, MAGNUM are a band who possess these very qualities. For almost 40 years, they have been among the most consistent leading lights in rock history and continue to impress with their unique style, a mix of powerful energy, deep melodiousness and perceptive lyrics. At the same time, MAGNUM’s songs immediately captivate their audience and lose none of their fascination, even after repeated listens. “I’d even say that many of our songs reveal all their strong points only after you’ve heard them a few times,” guitarist/songwriter/producer Tony Clarkin explains, adding: “Our brand-new compositions in particular feature a large number of harmony and rhythm changes, I feel they should definitely be heard a few times so you can discover their many details.” Clarkin is referring to the latest Magnum release, The Visitation, due out on Steamhammer/SPV in Europe on 17 January 2011 (Germany: 14 January; US & Canada: 25 January) and without a doubt one of the strongest albums in the band’s history to date.

The five MAGNUM members, Tony Clarkin (guitars) , Bob Catley (vocals), Mark Stanway (keyboards), Al Barrow (bass) and Harry James (drums), have invested all their passion, skill and great experience to come up with an optimum result. “I feel we haven’t brought out one really weak album, yet none of our previous recordings featured a better production than “The Visitation” Clarkin announces proudly. “This release sounds more rock-oriented and at the same time more personal than anything we’ve recorded so far, and it definitely features the widest range of stylistic directions and atmospheres. What makes it so special is the fact that the music’s arrangements match the atmosphere and the lyrics’ statements. Every cog turns perfectly within the wheelwork.”

MAGNUM prove repeatedly on “The Visitation” that their lyrics are anything but superficial or mediocre: ‘Mother Nature’s Final Dance’ has the musicians decry the destructive way we treat our environment. “Just look at what’s going on in the world at the moment, toxic red mud polluting a whole village in Hungary, the oil spill in the Gulf of Mexico – terrible. It’s always a mix of greed and lack of responsibility which leads to these kinds of tragedies.” The rock number ‘Freedom Day’, a kind of paean of praise to self-determination, is equally profound. Clarkin: “We live in freedom in Europe, but looking at a lot of South-American or African countries, you see oppression, you see people living under the brutal reign of a dictator. That’s why we say: let’s fight for freedom.”

The cover artwork, which was again created by graphic designer Rodney Matthews, reflects the lyrics of ‘Door To Nowhere’, which has Magnum look back at their own childhood. It would hardly be possible for a track to be more typical of this band than this number with its dynamic guitar parts, gritty arrangements and charismatic vocals. The Visitation will be available in four different formats: as a standard version (see the cover in yellow), in a limited-edition DigiPak featuring a bonus DVD (the black cover), as double gatefold coloured vinyl (the black cover) and for download. Starting early March 2011, Magnum will embark on a two-month European tour which will see the band present, along with songs from The Visitation and popular classics, tracks which haven’t featured on their live playlist for a number of years. So the party is about to begin!

Bonus DVD / Limited Edition Digipak:
The Visitation Lyrics, Live at the High Voltage Festival 2010 in London 2010: Brand New Morning – Les Morts Dansant – All My Bridges – When We Were Younger, Eyes Like Fire – footage (this is one of the tracks that didn’t make the album), Behind The Artwork video with Al Barrow (with tracks The Moonking & In My Minds Eye), Rodney Matthews Artwork, Photo Galleries, Moonblog – montage