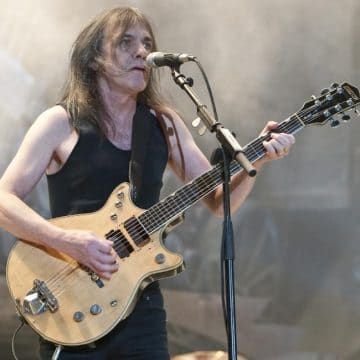 “Even when I’m tired from running around the stage for two hours, I’ll look back at what he’s doing and it gives me that boot up the backside I sometimes need. [laughs] Also, he can always tell me if I’m playing well or if I’m not. Mal‘s a very tough critic, and I know that if I can please him, I can please the world.

A lot of people say, “AC/DC—that’s the band with the little guy who runs around in school shorts!” But I wouldn’t be able to do what I do without Malcolm and the other guys pumping out the rhythm. They make me look good. Mal is really a great all-around guitarist. I know it says “rhythm guitar” on the album jacket, but if he sits down to play a solo, he can do it better than me. Not a lot of people have picked up on this, but in the early days he used to play lead. But then he said to me, “No, you take the solos. I’ll just bang away back here.” And what’s more, he actually plays rhythms. He just doesn’t make a noise; he works them out, and he knows when not to play.”

You can read the rest of the interview with Angus Young at Guitar World.