Mandy Lion states there will be no sophomore Wicked Alliance album with Jake E. Lee

Mandy Lion’s Pride and former WWIII frontman Mandy Lion was recently interviewed by All Rock Music & All Music Bands: National & Worldwide and asked whether there would be another Wicked Alliance album with guitarist Jake E. Lee. 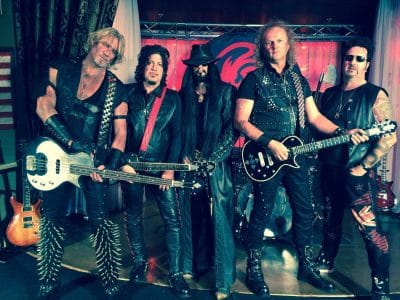 Lion replied: “I think it’s safe to say that there won’t be a Wicked Alliance CD. Jake is doing his own thing with RDC and I have two projects I’m very busy with myself. Between Mandy Lion’s Pride and Mandy Lion I don’t think I have time for anything else.

Wikipedia states the following about Wicked Alliance: “Lion wasted no time, and in 1994 began a new project and set out on the road to tour with Jake E. Lee (Ozzy Osbourne, Badlands) as Wicked Alliance. After a few years on the back burner, Wicked Alliance joined a record label that represents them. Wicked Alliance‘s Twisted Beauty CD that Lee and Lion worked on finally came to the light in late 2002 or early 2003 on the Pony Canyon record label.”

Lion had been working at one point on a project with George Lynch (Dokken, Lynch Mob), Dan McNay (Montrose) and Lez Warner (The Cult). All Rock Music & All Music Bands: National & Worldwide asked Lion if the album would get released to which he replied: “There are some songs that were created but the more into it we got the more I realized that George and I have completely different ideas on what we wanted to create together. I don’t know what it is about me that makes people want to get all experimental…? I love real rock and real metal. I think I make that very easy to see. But for some reason George wanted to get into some types of music I have absolutely no love for. Here is what I don’t get… if you call Mandy Lion to sing on your album then I think you should know that Mandy Lion is what you get… if that get surprises or confuses you then, quite frankly, I’m left befuddled. There are a whole bunch of songs that had a ton of potential… but there is no way I’ll sell out and do something I can’t believe in to make a buck… even if that situation includes my favourite guitarist ever…  So unless George is willing to make a rock record I don’t think this music will ever see the light of day.”

You can reward the rest of the interview with Mandy Lion at All Rock Music & All Music Bands: National & Worldwide’s Facebook page.