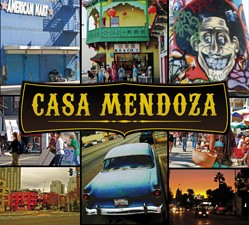 “Casa Mendoza” is a Latin-flavored melodic rock record with a commercial edge that is sure to appeal to fans of any of Mendoza’s work.

“Being of Latin-American descent, I have always heard music with the Latin influence in it,” Mendoza said. “This album gave me the opportunity to experiment and to see how far I could take it. I hope that fans out there are open to the fact that music is comes from a lot of places, and that it shouldn’t be put in a box. If it’s good, it’s good, regardless of genre.”

Top-notch musicianship shines through on Mendoza’s originals, as well as the covers he has selected for “Casa Mendoza.” “From the production process to the playing, everybody involved had a big influence on the record and I give them a lot of credit,” said Mendoza.

Mendoza is most famous for his work with rock and hard rock acts like Thin Lizzy, Blue Murder, White Snake, Ted Nugent, Lynch Mob, and Neal Schon and Soul SirkUS, but his vast repertoire of work goes beyond the rock genre. Mendoza has most recently been working on a project with Dolores O’Riordan from pop giants the Cranberries. When he’s not touring or otherwise working, Mendoza can often be found playing local Los Angeles jazz clubs with Joey Heredia and Renato Neto. The highly-sought-after monster bassist has rejoined Thin Lizzy once more and will be touring in 2011.

“It has been a long journey through this business through the ups and downs,” Mendoza said. “Always having that spiritual connection, that sanctuary you can go to, and having all these experiences of working with some of the best musicians in the biz are what drive me to keep creating music.

Mascot Records is an independent record company based in The Netherlands that specializes in guitar music, from metal to instrumental guitar, hard rock, prog rock and (guitar) fusion. For more information visit www.mascotrecordsusa.com.