Current Rose Tattoo and former AC/DC bassist Mark Evans was recently interviewed by Marko Syrjala for Metal-Rules and spoke about his thoughts on AC/DC including the passing of rhythm guitarist Malcolm Young and lead guitarist Angus Young continuing the band as the lone original member. Evans played bass for AC/DC from 1975 to 1977 and ended up playing on some of the band’s most revered albums including High Voltage (1976) and Dirty Deeds Done Dirt Cheap (1976). 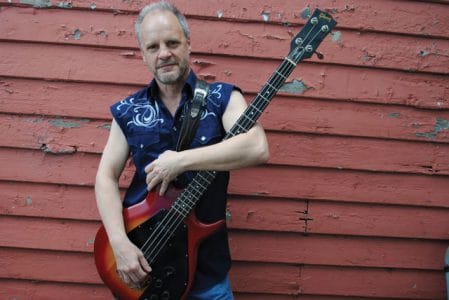 Evans confirmed that he attended Malcolm Young‘s funeral a few years back as he stated: “Yeah. [Rose Tattoo frontman] Angry [Andersson] and myself went to the funeral, yeah. We were invited. It was just really sad, man. Well, that was a bit of a celebration, but it was tough, man, because I know Malcolm’s son, Ross, very well. He lives very close to me in Sydney, and yeah, he’s– but I think in times like this you have to think about what Malcolm’s left. He’s left an amazing legacy, and he’s just a great guitar player, and it’s just one of those awful things that happen in life that are so incredibly unfair. But it is life, and he certainly achieved amazing things during his lifetime. To leave that heritage and legacy is just brilliant. He was a great guy too. I used to feel tall when I was in that band. I was the big guy even I’m only five-foot-six tall.”

In terms of Angus Young continuing AC/DC as the lone original member, Evans opined: “Well, I don’t think that– yeah, I don’t think I’m in a position to say to it is right or wrong. My opinion is the same as everyone else’s. Everyone has an opinion. My point is Angus is the guy who’s made it. He’s the guy that’s been there all along. He’s done every gig. He’s the guy that’s left to do and to carry on what Malcolm and George did. He’s earned the right to do it exactly how he should want to do. I think we should respect the opinion if he continues on with it. If he doesn’t continue on, I think we should respect that opinion too. He has the right to make the decision, but me personally, whatever he goes with, fantastic.”

Evans continued: “Yeah. That’s the thing though. Because the AC/DC fanbase is so, so strong, all those people who have followed them, some of those people might have started following the band from the very start, well over 40 years. AC/DC fans are invested emotionally, and they feel like they have some sort of ownership in the band because they’ve been fans for that long. And so that’s why people are so passionate about it. Angus would appreciate people being impassioned about it. But you have to think everyone has different opinions and everyone’s view would be different. My point is Angus has earned the right to– he will make the right decisions. I’m sure he will. And what’s right for him, you know? And you if you think the band, Angus and Malcolm were brothers and they were always together. He knew Malcolm all his life. Now when Angus first started having memories, he shared a bedroom with Malcolm. So, he was there all the time. And then when the band kept on playing, it wouldn’t have been till probably the mid-’80s where they spent any sort of time apart. So, it’s not just like, “Oh, I think I’m a band.” It’s brothers band too. So, there are all those complexities about it. So, his decision carries a lot of weight. Whatever decision he comes to, do you know what I say? Bravo. Well done. Whatever it is.”

In regard ti how it feels to be a part of Rose Tattoo, Evans advised: “Oh, it’s great. I’m very, very happy because Rose Tattoo have– I’m on record. I can say, Rose Tattoo is my favourite band. If the Beatles could ask me to join them; I’d say, “No. I’m playing with Rose Tattoo.” I saw Rose Tattoo’s first gig ever, with Bon Scott, at a club in Sydney called Chequers, and they did their first gig on New Year’s Eve, 1976. It was Rose Tattoo’s first gig. Ironically, three years before at the same club, on New Year’s Eve, was AC/DC’s first gig. Same club, three years apart. And Bon loved Rose Tattoo, and he went to George Young and Harry, said, “You’ve got to sign this band.” And a few months later they were signed, so yeah. And there’s a connection because Geordie was playing bass by that stage, and he was in Buster Brown with Angry and Phil Rudd. So, it was all sort of a small circle. Yeah. But yeah, with Rose Tattoo, I’ve just loved them and then it’s just now that the time has been right to join the band. And it’s very important to me because I’ve had a lot of very good friends of mine have been in Rose Tattoo, Pete Wells, Ian Rilen, Mick Cox, Digger, and I’m really honoured to have the chance to continue on that heritage because it’s very important. It’s not just joining a band; it’s joining Rose Tattoo because I’m continuing on with Angry what he set out to do, but with my friends that aren’t around anymore. God bless their souls. So, it’s a big deal to me. Very, very important.”

You can read the rest of the interview with Mark Evans at Metal-Rules.