The group released its self-titled debut album back in 1990 and the first single off that record was “Skin To Skin.” 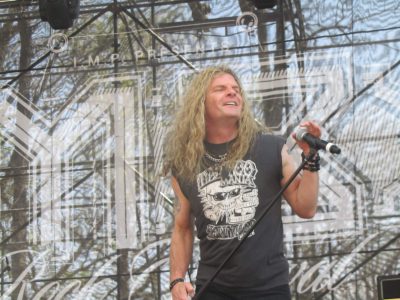 Evans was asked whether he thinks “Skin To Skin” was the right choice for the first single to which he replied (as transcribed by the 80’s Glam Metalcast podcast with slight edits):

“No, we wanted “Find Another Way” to be the first single. The record company’s plan was to get one of the heavier songs out there first to get it on hard rock radio and build it that way. Then we would come back with the “Find Another Way” as the second single and that would be the icing on the cake. We thought we should do the icing on the cake thing first and make your best impression. I didn’t agree with that, but [it] did OK for us. Unfortunately, when you’re dealing with the president of the label, you don’t have a lot of say. The “Find Another Way” video was halfway done when we ended up having issues with Columbia Records. We’ve tried to get the footage of what they filmed, but no luck on that.”

In terms of what happened with Columbia Records and the band disbanding in the ’90s, Evans indicated:

“The president of the label told us he just signed this band called Alice In Chains. ‘This is the future and you guys are the past.’ They shut it down. That was the end of it and the record was actually doing well. They just decided that grunge was the future and that’s what they were going with. I was the first to say I couldn’t do it anymore. We just didn’t mesh with what was out there at that point. I still needed to make money, so I ended up starting a local cover band. I did that for a few years and then I just walked away, I was done.”

You can listen to the interview with Mark Evans by the 80’s Glam Metalcast podcast below: