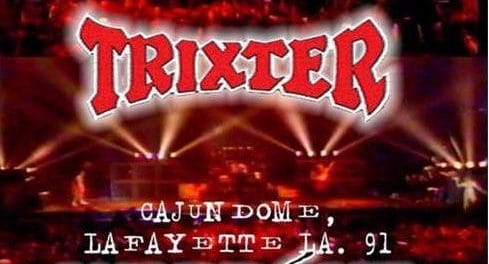 Trixter drummer Mark Gus Scott was recently interviewed by Chuck Shute for the Chuck Shute Podcast and the drummer spoke Trixter electing to open for Warrant and FireHouse on the Blood, Sweat & Beers Tour rather than for David Lee Roth in 1991.

Scott indicated: “You know what? The real cool thing about that whole tour, we didn’t think it would be as big as it was. We thought, it was good, and here’s a real funny story. Well, not funny, but interesting story that a lot of people don’t know. And, and, and a part of me feels like, I shouldn’t even tell it, but we got a call, we got a call from David Lee Roth. He said, “Hey boys, we 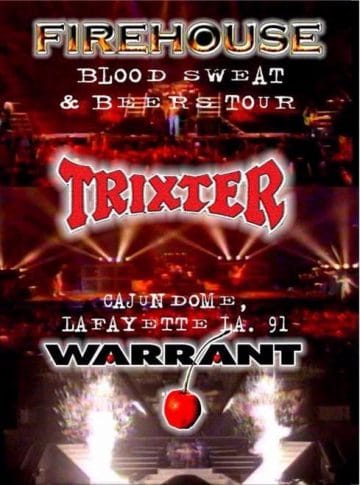 want you to come out and tour with Dave this summer. It’s going to be a great freaking package.” Like holy crap. Now Van Halen, they were our Gods. Gods. So the idea of opening for Dave and I had just, uh, I way before, before I actually worked for Dave at, the Meadowlands Arena on his birthday as, as like a roadie dude. And he was so freaking, he was so nice. The guys in the band — Billy Sheehan and Greg Bissonette were the nicest guys.

It was crazy. He even played, he played the Trixter demo tape backstage at his birthday party. So it was like, it was so cool. Dave — so I guess, you know, he kept us in mind or something that, so we were moving up. He said, we, you know, guys, come on open for David Lee Roth. And we were like, “Holy cow! We’re gonna open for Dave! Like I can’t believe It! I can’t.” Then Warrant called and Warrant said, “Listen, we’re putting this together. It’s going to be Warrant, Trixter, FireHouse.’ Let’s go out.” And we’re like, “Dude, we’re going with Dave. We’re going with Dave.” And our management said, “Whoa, Whoa, whoa, boys. Let’s have a talk about this.” And we’re like, “How do we have a talk? It’s David Lee Roth. How can we not blah, blah.” And uh, you know, we, uh, we were listened to our management and good management.

This is, a lot of people don’t understand why you have a manager and here’s exactly why you have a manager. And we had a good manager. He said, “Boys, David Lee Roth Eat ‘Em And Smile kicked ass, love them. They did very, very well. The next album Skycraper not doing so well. You know Dave, we really, he needed a strong opener. I guess that’s why he called we, you know, we were, we were the best new band, Hit Parader magazine where we were arguably one of the, one of the, one of the top opening acts you could get.”

Scott continued: “So management sits us down and says, “You know, hey, Warrant has got a new Cherry Pie record, it’s kicking ass.. FireHouse hot off the presses. That right out of the box. They got a top 40 hit with “Don’t Treat Me Bad.” And that “Love of A Lifetime” was in the bullpen about ready to freaking bust. Wow. And you guys, you have three number one videos on MTV. Now, do you know what kind of package this is going to be? This is, this is target marketing to the demographic of people that buy that stuff. And you know what? Management was right. Our hearts said, “Dave, Dave, Dave.” How can we possibly consider someone else? But you know what, from a strategic standpoint, from analyzing the situation, that’s what a manager does, to direct the band in the right way.

Because you know what, it ended up being the best God damn tour of 1991. And it was, it helped me buy my house. So, you know, it’s like… Yeah. So I mean, a lot of people don’t understand the back stuff and I think that’s, it’s important to shed some light on, you know, people make that mistake, those mistakes today. And they, I see. And it’s like, “What the hell are you doing man?” To have an objective viewpoint, to have great guidance. It’s such a valuable thing to have, man. And I got to tell you, we had to, we didn’t do it by ourselves. We had a lot of help along the way and we were very, very fortunate in that regard.”

Trixter‘s “One In A Million” video:

Trixter – One In A Million

Music video by Trixter performing One In A Million. (C) 1989 Geffen Records