Kendall was asked as a guitarist, what does he like about having a keyboardist in the band, to which he replied: 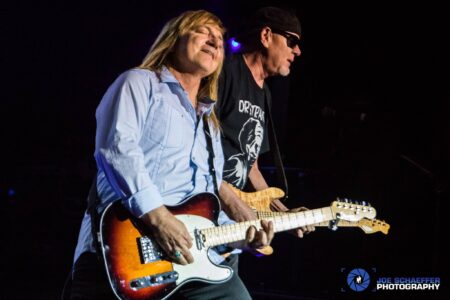 “When we started out on our first album, we didn’t have keyboards, it was just a trio – you know, bass, guitar, drums and lead singer. And on our second album, Michael (Lardie) had worked as a second engineer in the studio, and we wanted to put keyboards on one of the tracks. And he goes, “I play keyboards.” So we go OK, and we kind of showed him what we needed and he put some keyboards on the album.

So then, after the album was finished, we asked him, “What do you think about coming and playing the keyboard parts? And we’ll kind of put you behind the curtain or something.” [Laughs] He goes, “Well, not only can I do that, but I can play rhythm guitar, too.” So I go, “Oh, that’d be great because then we get sound just exactly like the record.” And so we started out that way to where you couldn’t really see him, and then we got him a (riser) on the stage and pretty soon girls were hunting for him.

Eventually we just made him a member of the band, and it expanded our musical range from, adding keyboards and more orchestration. And you can do more things live. We like the keyboards and the rhythm guitar and the two guitars. We have two guitar parts, so it’s kind of like the way Aerosmith puts guitars together. We’re never playing the same part. It’s always an arrangement to where we’re both playing two different musical parts. And it’s pretty cool.”

You can read the rest of the interview with Mark Kendall at Alabama Media Group‘s website.

Wikipedia states the following about Lardie‘s time in Great White: “Lardie joined Great White in 1986 as a session and touring rhythm guitarist / keyboardist / backing vocalist and would eventually become a permanent band member, as well as the band’s producer and engineer. The group broke up officially in 2000, and their final concert was recorded and released under the name Thank You…Goodnight!. In 2006, Great White reformed and continue to tour as of October 2008.”