Great White guitarist Mark Kendall was recently interviewed by Ultimate Classic Rock and he talked about the 30th year anniversary of the release of the group’s breakthrough album Once Bitten, which contained the hits “Rock Me,” “Lady Red Light” and “Save Your Love.” 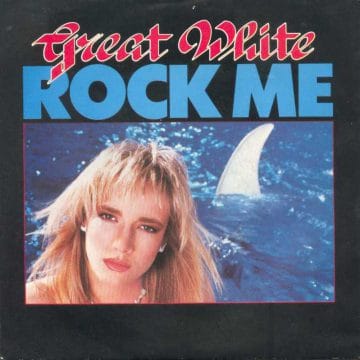 Kendall was asked if he was surprised to see a seven minute plus song like “Rock Me” getting significant airplay to which he replied: “I was scared to death of it. I told the band this is a great song, but we’re not Phil Collins. We don’t have 13 hits behind this song. This is our first chance and we’re putting out a seven-minute song. This is crazy. Every single of “Rock Me” that Niven sent to radio, he put 3:59 on it. So literally we lied about how long the song was. By the time they figured it out, the phones went crazy and everybody loved the song, so they couldn’t do anything about it. It was already a hit. But that’s more genius coming from Alan Niven. He was a very smart man. But one thing we couldn’t get away with was having it seven minutes on MTV. Michael had mentioned that they didn’t even give Madonna seven minutes. You know, she was the biggest thing in the world at that time. So we tried a million different edits and nothing was working. Nothing sounded natural. So what we decided to do is go back in the studio and make a five minute version of the song. So if you listen to the MTV version of that song, we captured all of the performances and it almost sounds exact, because we used the same guitars, the same amps and so it was a very similar performance. In fact, verbatim, pretty much. Like, you can’t really tell the difference. But we cut verses in half, we shortened pieces and we just made the song five minutes so it would sound more natural. We had to do that for MTV. But I don’t think it lost much.”

In terms of whether the Great White band members could tell that “Rock Me” was a long song, Kendall stated: “As long as it was, we really didn’t realize that. In fact, even when you hear the song now, if you ask 10 people how long do you think that song is, they might say five minutes, because you never feel like it’s going on like a long movie, like, they should edit like a half hour of this movie down, it’s too boring. It wasn’t like that. There were so many dynamics in the song, you were constantly being sucked into the song. You’d never feel like it’s seven minutes. That’s why I think we got away with the lie about it being 3:59.”

You can read the rest of the interview with Kendall at Ultimate Classic Rock.