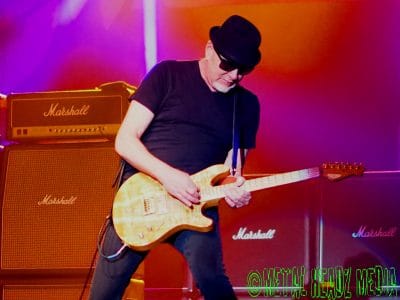 “We police the (trade) mark because we own the Great White name but we wanted to compromise with Jack and give him a way to make a living,… And the only way we could think of was to let him call it Jack Russell’s Great White and have his name prominent.”

“We haven’t really run into too many problems. Sometimes, occasionally, a promoter will just call it Great White and we’re not playing and we’ll have to send them the big court papers and everything.”

“That can be a nightmare but it doesn’t happen often, especially now.”

“I think he’s gone in a different direction with his music so musically there’s no confusion really.”

“His name is pretty prominent so I think, unless somebody is just a little bit dense, they would not … I mean, if you see Jack Russell’s Great White and Jack Russell is really big on a record, I think you could figure it out that he has assembled a band around him.”

“The ones that can’t figure it out, I don’t know what to say about that.”

“He plays a lot of clubs. We really don’t play clubs. The reason he plays M3 is because his manager runs that concert. That’s the only reason we’re not playing on that bill, that his manager is partner with the guy and they’re the promoters for that concert every year.”

“It’s all good. The fans are the fans. They’re gonna do what they’re gonna do. We write the same way we always do, we changed singers, I don’t know what to say about it. That’s all I can tell ya.”

You can listen to the interview with Mark Kendall via the White Line Fever podcast.