Great White guitarist and founder Mark Kendall was recently interviewed by Shaggy of Idaho’s 94.9 & 104.5 The Rockradio station and spoke about the band’s original and long-time singer Jack Russell. 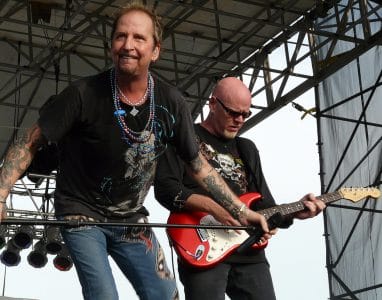 Kendall stated (as transcribed by Blabbermouth with slight edits):

“Jack and I have never even, I don’t think, in the whole time we were together, even got in an argument. People think, ‘Oh, patch things up.’ We have nothing to patch up. It’s just that he kind of went off in this dark world and couldn’t get out of it, and we didn’t know what to do. Instead of getting well and coming back, he came with a lawsuit. He wanted to get, like, cover band guys and just play Great White songs and take our name, so we really had no choice but to defend ourselves. But I’ve always been close with Jack as far as being friends. Like a lot of people, he had a lot of demons, and it did damage to him, and that’s about it. I’ve never taken it personally, because I work daily, practically, with recovering addicts. I know some get it and some don’t. It never affects me personally. I know Jack‘s out there singing, so more power to him.”