Great White founder and lead guitarist Mark Kendall was recently interviewed by Metal Mike (no relation to Sleaze Roxx writer Metal Mike) for the 80’s Glam Metalcast podcast. Kendall spoke about the two Great White albums — Hooked (1991) and Psycho City (1992) — which followed the group’s most commercially successful album …Twice Shy (1989), which was certified double platinum in Canada and the United States of America. 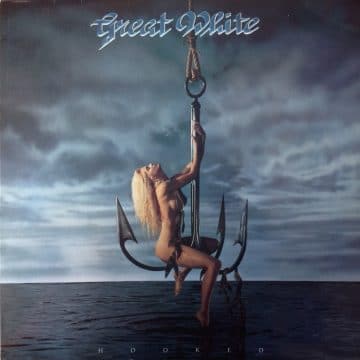 In terms of the label Capitol Records‘ expectation for Hooked after the success of …Twice Shy, Kendall opined (as transcribed by the 80’s Glam Metalcast with slight edits): “They wanted us to sell four million! A lot of the fans liked that album. In my opinion, we didn’t quite have what we needed on that one. I think we rushed through it. I think we should have done something different with the production. I don’t know what the other guys think, but’s there’s a lot of after thoughts on my end. I think we fell a little short.”

On whether he thinks Psycho City would have fared better if was released in the place of Hooked, Kendall indicated: “Yes, absolutely. We really stepped up our game on Psycho City. We really got into it and made a good record. The timing of that record was the downfall, with the Seattle boom and everything. If we could have put out Psycho City [in 1991], I think it would have done better.”

Sleaze Roxx stated the following in its review of Hooked: “Hooked is as much an extension of …Twice Shy as it is a new album with heavy blues influences and even more mainstream than Great White’s previous record. The most obvious example of this is the lead off track “Call It Rock N’ Roll.” This is virtually a carbon copy of “Once Bitten, Twice Shy.” It rocks, but you’ve heard this song before. “Original Queen Of Sheba” is another three chord driven blues rocker, but really doesn’t seem to go places. “Cold Hearted Lovin’” starts off slowly, but about half way through gets into a ZZTop groove and doesn’t look back. “Can’t Shake It”, “Heartbreaker” and “Desert Moon” are more toward the classic Great White sound, but the production is too polished to really return to the Once Bitten… or Shot in the Dark era. “South Bay Cities” is kind of fun, and “Congo Square” has a cool 12 string guitar and organ, but “Lovin’ Kind” and “Afterglow” are throw away ballads.

Hooked is nowhere near as strong as …Twice Shy, and is a major departure from the group’s mid ’80s sound. Regardless, Hooked was certified gold only two months after its release in April 1991, and peaked at #18 on the Billboard Hot 200 Album chart.  But despite these successes, by 1993, Great White were looking for a new record company and another hit song. The rest, as they say is history.”

You can listen to the interview with Mark Kendall by the 80’s Glam Metalcast podcast below:

In this episode I talk to the Guitar Legend from Great White – Mark Kendall. We talk about what the band is up to today and hear some classic stories from t…