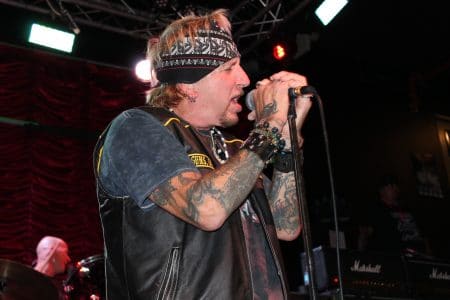 In terms of his relationship with Russell, Kendall indicated (as transcribed by the 80’s Glam Metalcast with slight edits): “I haven’t spoken to him in a long time. I guess he’s out there trying to do it. He has to cancel shows and stuff like that. The situation was never like, “I hate you” or some big fight. It all had to do with substance abuse… him not taking care of himself and him not being able to perform. We told him to go get well, and a year later he came at us with a lawsuit. He wanted the name and just to hire people to play with him and we had to defend ourselves. There’s no ill will. I never take anyone’s addictions personal. I work with a lot of people with addictions daily. I never take it personal because I know it’s a difficult thing to get away from. It’s really unfortunate. We went as long as we could with it. He had walkers, colostomy bags… It was a horrible situation.”

You can listen to the interview with Mark Kendall by the 80’s Glam Metalcast podcast below:

In this episode I talk to the Guitar Legend from Great White – Mark Kendall. We talk about what the band is up to today and hear some classic stories from th…