Former Bang Tango guitarist Mark Knight has been quite open publicly about his attempts to reunite the original Bang Tango line-up consisting of himself, Leste, guitarist Kyle Stevens, bassist Kyle Kyle and drummer Tigg Ketler over the years.

Knight had been publicly silent on exactly why the reunion had yet to happen but the guitarist has now revealed why he believes that the reunion will never happen. 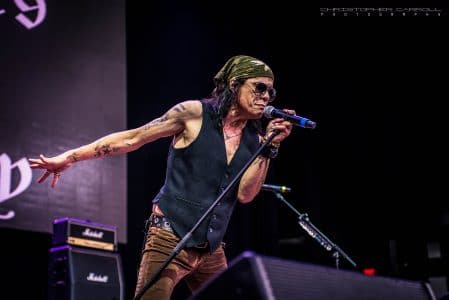 The following message was posted on Knight‘s Facebook page less than an hour ago:

“Just to make myself clear this isn’t about the bass player or any other current members mouthing off about Bang Tango original members! This all is about Joe Leste and his over blown ego! He surrounds himself with yes men for years that are sub par musicians except for a few! They worship him for what he has done and a pay check. The original guys won’t play that game. That is the core of the matter to why Bang Tango the real Bang Tango will never reunite! Happy Fourth of July! MK… ….”

Back in January 2016, Knight advised Sleaze Roxx in an interview as follows: “I think I hit [singer] Joe [Leste] up about a mutual friend that had passed away and I kind of reached out to Joe about him. We ended up — by the end of the conversation, we were talking about when we get onstage again and everything just sort of [got] washed under the mat. It all just went away, You know, we did do some great stuff together in the band and it’s like, “We are not getting any younger. Why not do something with it?” So I tried to do kind of a reunion this summer with all the original guys. It just did not pan out for personal reasons. Not me, but just the dynamics of bands. Couple of things went bad. Not between me and Joe, so I went down there and had a little reunion with him and got up onstage with him. You never know where it is going to go.”