Slaughter and former Vinnie Vincent Invasion frontman Mark Slaughter was recently interviewed by Richie for the Focus On Metal podcast to discuss amongst other things the 30th year anniversary of Slaughter‘s debut album Stick It To Ya. That album was released back on January 23, 1990 via Chrysalis Records, which was the same label that released Vinnie Vincent Invasion‘s self-titled debut album (1986) and follow up album All Systems Go (1988). 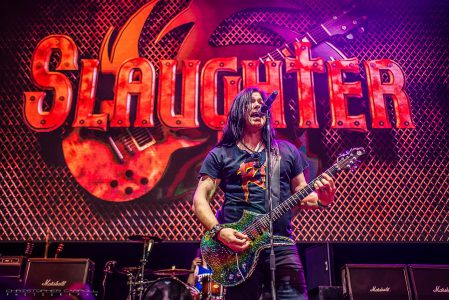 On whether there were any other bands that reached out to him to audition for them when Vinnie Vincent Invasion ended, Mark Slaughter indicated (as transcribed by the Focus On Metal podcast with slight edits): “Believe it or not, Steve Stevens. He was putting together a band called Atomic Playboys and I went up to New York and I met up with Steve and talked. He’s an incredible guitar player. I didn’t know where I was going even though I had my own deal at the time but Warner Bros. courted me to go up and meet with him and I did. We just sang a couple of [Led] Zeppelin tunes and it was a baptism of fire moment as I realized I knew more of the guitar parts than the lyrics to the songs because I was originally a guitar player. We jammed on some Aretha Franklin stuff I knew.”

Wikipedia summarizes Atomic Playboys as follows (with slight edits): “Atomic Playboys is the first studio album by guitarist Steve Stevens, released in 1989 through Warner Bros. Records; a remastered edition containing two bonus tracks was reissued on August 5, 2013 through Rock Candy Records. The album reached No. 119 on the U.S. Billboard 200 chart. The cover art was done by surrealist artist H.R. Giger, who designed the Xenomorph creature in the Alien film series.

Atomic Playboys was also the name of Stevens‘ band at the time, which was only meant to be a one-album effort upon him being signed to Warner Bros. In a 2001 interview, when asked about the possibly of reforming the group, Stevens replied: “Absolutely not. That group was a very expensive hobby”.”

In terms of whether there was any pressure from the label to find a name guitar player after Mark Slaughter and bandmate Dana Strum (bass) left Vinnie Vincent Invasion to forge a band of their own, the singer stated: “No, they didn’t really care as long as the music was there. It was very important to me that the guys we brought in were talented, had the same influences as us and we could rub elbows with them. We had spoken to Doug Aldrich but Dio was talking to him at the time but he decided to do Lion and I met Tim Kelly and he was the guy. The only other named drummer we auditioned for Slaughter was Nick Menza who would join Megadeth. He was a great drummer and could do pretty much anything but it didn’t seem like he would fit our style of music.”

You can listen to the interview with Mark Slaughter via the Focus On Metal podcast’s website.