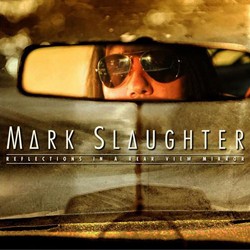 Mark Slaughter has released his first ever solo album entitled ‘Reflections In A Rear View Mirror’. The album will take you on a rock ‘n’ roll journey like no other as Slaughter delivers eleven diverse songs, each with a story of it’s own.

While the Slaughter frontman says that, “CD’s are not available yet, but they are in the works”, his debut can be purchased as a limited edition autographed iDitty Digital Scan Card at www.markslaughter.com. With this card you can download the full album to your phone, computer and tablet, and will forever have a one of a kind signed laminate keepsake.

The album was mixed and mastered by legendary producer Michael Wagener (who has worked with artists such as Ozzy Osbourne, Dokken, Skid Row and Extreme) at WireWorld Studio with Slaughter playing all instruments except the drums, which were handled by Mark Goodin.

“What happened is I had my stuff done and I looked at Michael (Wagener) and said, ‘would you be willing to mix this’,” Slaughter recently told Hard N Fast late last year. “I gave it to him and he took one song and he goes, ‘Man, this is great’, and he really got into it. So we mixed that and got that in the can — its all done — now I’m just going try to figure where I’m going to put it out and what I’m going to do with it. Its more about doing the heart then it is throwing it out there on a label that’s not going to do it right. I’m just going to put it out myself at this point.”

In March of 2014 Slaughter released his first ever solo single entitled “Never Givin Up” through Thunder Spirit Records. A portion of the proceeds from the sale of “Never Givin Up” went to the Red Circle Foundation, a non-profit organization providing immediate gap funding assistance to the families of United States Special Operations Forces.

“It’s just been one of those things, we (Slaughter) stopped making records around 1999 — that was our last record,” the former Vinnie Vincent Invasion singer told SOFREP Radio last year. “We’ve been doing shows, we just tour every summer and that’s kinda what we focused on. I’ve been doing music for television for a while, produced a band or two, and really got into other aspects of the business. Lately I just felt the need to start being creative again so I started writing this song and other songs, and low and behold Never Givin Up was written for the sake of our military. Every night that I’ve done Fly To The Angels, which is our biggest Slaughter hit, I would always send that out to the troops. For, number one, defending our country and giving up their time and their lives and everything else for it. I think more people should be thankful.”