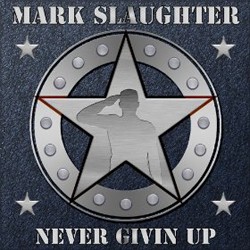 Slaughter frontman Mark Slaughter has returned with a new solo single entitled “Never Givin Up”. Released through Thunder Spirit Records, the Michael Wagener produced single is available for preview and purchase at Amazon.com.

A portion of the proceeds from the sale of “Never Givin Up” will proudly go to the Red Circle Foundation, a non-profit organization providing immediate gap funding assistance to the families of United States Special Operations Forces.

“It’s just been one of those things, we (Slaughter) stopped making records around 1999 — that was our last record,” the former Vinnie Vincent Invasion singer recently told SOFREP Radio. “We’ve been doing shows, we just tour every summer and that’s kinda what we focused on. I’ve been doing music for television for a while, produced a band or two, and really got into other aspects of the business. Lately I just felt the need to start being creative again so I started writing this song and other songs, and low and behold Never Given Up was written for the sake of our military. Every night that I’ve done Fly To The Angels, which is our biggest Slaughter hit, I would always send that out to the troops. For, number one, defending our country and giving up their time and their lives and everything else for it. I think more people should be thankful.”

“Never Givin Up” features Mark Slaughter performing all instruments except drums, which were provided by Mark Goodin.

In 1990 Slaughter hit radio, MTV and the U.S. touring circuit like a tornado — coming seemingly out of nowhere to roll through everything in its path and turn it upside down. Touring the world with bands that they loved — KISS, Ozzy Osbourne, and others — meant the good times were just a song away and their first hit single, “Up All Night”, certainly fit into that mold. Their second chart-topper, “Fly To The Angels”, was more representative of the spirituality and awareness that goes into most of the band’s music and lyrics. But never were Slaughter more accurately represented than live onstage in front of their legions of devoted fans.