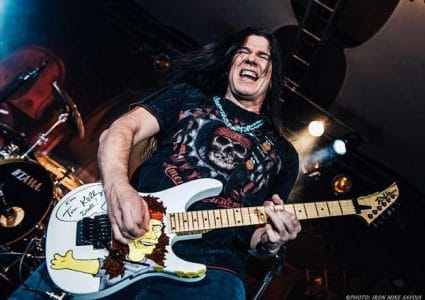 The singer was asked whether Slaughter which also features bassist Dana Strum, guitarist Jeff Blando and and drummer Zoltan Chaney, will ever do another album to which he stated (as transcribed by Blabbermouth):

“If I can get these guys in the studio and away from playing with Vince all the time, we’d be able to do that. [Laughs] Nobody’s getting rich by making records. It’s not about that. It’s about your art — you stick your art forward and you continue to make art whether it sells a zillion or it sells nothing. I think that’s really where I’m at. I’m not looking at the value of it, because in time, it becomes more valuable as time goes by.”

You can read other excerpts of the transcribed interview with Mark Slaughter at Blabbermouth and listen to the entire interview by New York radio station Q103 below: