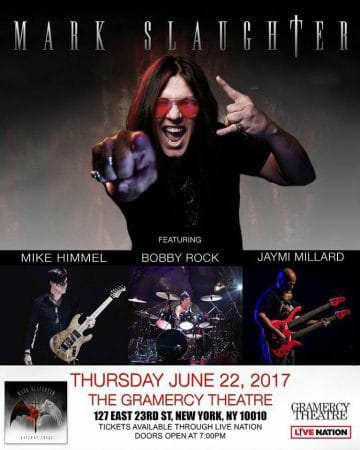 Fresh off the heels of the release of his new solo album Halfway There, Slaughter frontman Mark Slaughter has announced that he will be playing his first ever solo show at The Gramercy Theatre in New York, New York, USA on June 22, 2017.

This will apparently not be a one time show as the following is posted on Himmel‘s website:

“Mike Himmel will be on the road as the lead guitarist in Mark Slaughter‘s band to promote Mark‘s new album “Halfway There“.

The tour kicks off in New York City at the Gramercy Theatre on Thursday June 22, 2017 at 7pm.

Keep watching for more dates to be announced soon!”

Sleaze Roxx stated the following in its review of Halfway There: “Overall, another great listen from a musician that I have so much respect for. As I stated, Slaughter’s versatility is so evident. For fans of the band Slaughter, this is a must have, but also for those also looking for a simply diverse and moving album, Halfway There is very worth checking out. I must mention that Slaughter’s label has created some cool packages for purchase. This album will be available on CD, download and vinyl. For me, the vinyl is something I will have to get my hands on. As for the record label, this album is being released by the EMP Label Group. The “E” stands for Ellefson, as in Dave Ellefson from Megadeth. I make mention of this because I think it is outstanding to see a label run by a musician.”