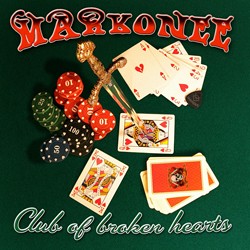 Markonee Returning With ‘Club Of Broken Hearts’ On June 14th

Markonee are set to release their third album, ‘Club Of Broken Hearts’, on June 14th through New Venture Music. The new album marks the recording debut of singer Alessio Trapella, who joined the band in 2011. For their latest effort the Italian five-piece recorded 12 original tunes and deliver their strongest set of songs to date.

This time the album was mixed and mastered by Roberto Priori (Danger Zone, Wheels Of Fire) and also features a guest performance by Michele Luppi (Los Angeles, Secret Sphere, ex-Vision Divine). The album sees the band rocking a little harder than on their previous record ‘See The Thunder’, offering driving guitars, majestic vocals and a driving big time groove. Highlights include the rock anthem “I Say No”, the catchy title track, the cleverly arranged “Shaken & Stirred” and the musical tribute to their hometown, “Rock City”.

Markonee originate from the lively rock scene of Bologna, Italy, where the band was founded by guitar player Stefano Peresson (ex-Danger Zone) back in 1999 together with guitar player Carlo Bevilacqua. Adapting their band name from the Italian radio pioneer Guglielmo Marconi, the band’s sound carries on classic hard rock in the tradition of genre favorites such as Winger, Ratt, Warrant, Skid Row, Pink Cream 69, Firehouse and Gotthard.

So far the band have released two records — ‘The Spirit Of Radio’ (2006), a concept album about the invention of the radio, and ‘See The Thunder’ (2009), which was mixed and mastered by Beau Hill (Alice Cooper, Europe, Ratt, Winger). “While listening to See The Thunder, you begin to feel as if this band is from the wrong time,” stated Sleaze Roxx in a review. “That doesn’t mean they sound dated at all, just that this is the type of music that made women wet their panties, and men envious, in the late ’80s.”

More details on the band can be found at www.markonee.com.