BulletBoys frontman Marq Torien was recently interviewed by Chuck Shute for the Chuck Shute Podcast. The interview covers a lot of ground including Torien auditioning for Mötley Crüe just before John Corabi was considered for the band, his very brief tenure as a guitarist in Ozzy Osbourne‘s solo band and his time in Ratt. 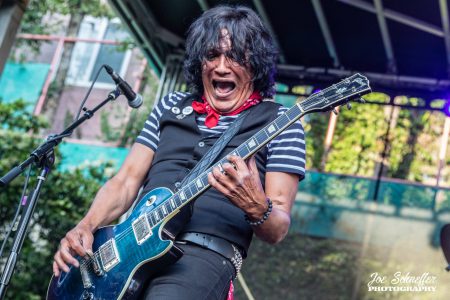 With respect to the latter and how long he was in the band, Torien indicated (as transcribed by Buzz Sprout with edits): “Well, not really a short time. Almost a couple of years.”

Torien continued: “Yeah. I wrote their first song with myself, Stephen [Pearcy] and Robbin Crosby — a song called “You Think You’re Tough.”  Like their first hit song, and I happen to write that song. So me and Stephen, what happened was after Ozzy, you know, I didn’t get the gig. I was hanging out a lot with Stephen and who I love dearly, definitely one of my mentors. And you know, here’s the whole thing what happened and he thought it was really shitty what they did to me. So he goes, ‘Listen man, I’m not feeling with Warren [DeMartini] right now. Same with Robb. We’re kicking him out of the band. He goes ‘[Inaudible] And we want you. Do you want to be in Ratt?’ That’s exactly what Stephen said. And I’m like ‘I’m in’ because I love, they were my favorite band. They were friends of mine. They were my favourite. Stephen hired me to be in Ratt. So we did a bunch of shows all over Southern California everywhere.

In fact, I was talking to Stephen like three or four days ago. We were chatting about some things and we’re cracking up. So we’re talking about Ratt and… [inaudible]. Like right before, we were getting ready to do the EP. Stephen had a long talk with me and says listen, ‘I’ve got to let you go. And I’m gonna tell you why. Your singing is incredible. You sing better than I do. Your guitar playing is incredible. I think you need your own band. You need to go form your own band [laughs].’ And I was like, ‘Whaaaat? What are you talking about? I love you guys. We’re going to do our first EP and you’re kicking me out of the band?’ So yeah, it was a bitter pill to swallow. It was very bitter at first for Stephen and for Robbin because we were friends and I was like their little brother. Stephen wasn’t really at that time, really gelling with Warren but he knew as a leader, the decisions that he has got to make, to be able to do what they need to do. You know, Warren‘s family is pretty wealthy. A lot of different things came into play with that.”