Surprising news from the Crashdïet camp as guitarist Martin Sweet‘s brother Michael Sweet has temporarily replaced the group’s long-time drummer Eric Young in the middle of the sleaze rockers’ Idiots On Tour 2019 throughout Europe. 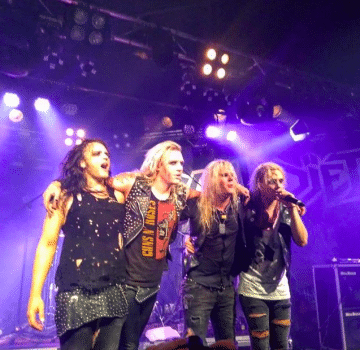 “As you might have noticed, @michaeltxrofficial (Martin’s brother) is standing in for Eric, due to some personal things he has to take care of. Everything is fine with Eric and he will be back behind the drums ASAP!”

The Idiots On Tour 2019 started at the Bastards Club in Osnabrück, Germany on October 2, 2019 and it appears as of the 12th stop of that tour, Michael Sweet was now on drums instead of Young. Crashdïet have one more show at On The Rocks in Helsinki, Finland tonight (on October 19, 2019) before taking a break until November 2, 2019 where they are scheduled to play Palatstet in Linköping, Sweden.

Young has been Crashdïet‘s drummer since 2002 and has played on all of the group’s albums. According to Wikipedia, Young replaced Tom Bones who was the band’s drummer from 2000 to 2002 in an earlier line-up spearheaded by the now deceased frontman Dave Lepard.