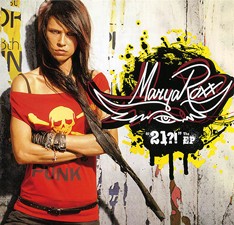 GLOBAL MUSIC are pleased to announce the signing of MARYA ROXX and the release of her debut album, PAYBACK TIME, available throughout Europe from Nov 5th and in the UK Nov 8th 2010.

2009 saw MARYA ROXX turn from bass player with platinum-selling pop/rock sensation Vanilla Ninja, into the credible rock/metal artist she always aspired to be.

With her debut album PAYBACK TIME, produced by the legendary Kevin Shirley (Iron Maiden, HIM) Marya has assembled a powerhouse of a band which includes former Anthrax guitarist Paul Crook, Scott Metaxas from Nuclear Assault and the exceptional Jim Roe from Incantation.

A star in the making, Marya has already headlined her own European tours and opened for a number of big-named artists including Primal Fear and Skindred; be on the look out for her next set of dates, coming soon!