Masque is thrilled to announce the posting of the Sweet Revenge video from the Face First CD, which was recently released by Suncity Records.

The video features live clips from various shows originally filmed at The Whisky, Roxy, Troubadour, FM Station, LA Sports Arena and other venues. Many of the clips were filmed by fans in attendance. The video, which can be viewed below, also features some rare off stage antics.

The long awaited “Face First” CD from original Hollywood Glam Rockers MASQUE has been officially released on SunCity Records. The Face First CD features hard edge “in your face” tracks including “Sweet Revenge,” “Walk Tight” and the title track “Face First” matched by the unforgettable melodic hooks of “Shame,” “Lover Lover” and “Wrap Your Arms Around Me.” “There’s something on the Face First CD for everyone,” states Masque lead vocalist and cofounder Tony Kelly. “It’s what Rock n Roll is supposed to be – real drums, real guitars and lots of attitude.” The Face First CD is now available for purchase directly from the bands MySpace page at www.myspace.com/hollywoodmasque. 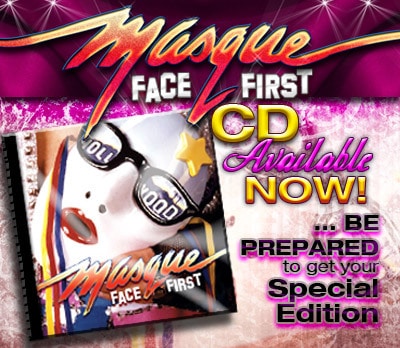