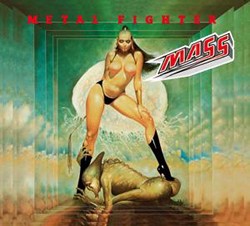 Mass are reissuing their ‘Metal Fighter’ and ‘War Law’ albums through SPV/Steamhammer’s new “Rare Classics” label. Both CDs will be available on June 25th in Germany and June 28th in Europe.

When hard rock and heavy metal were on a real roll in the ’80s, MASS admittedly were merely in the second line in their home country behind the international flagships Scorpions and Accept.

Nevertheless, they found acknowledgment and fans beyond the German borders. More than 200,000 albums sold in total explaining the significance that the quartet from Regensburg enjoyed in the hard ‘n’ heavy scene for ten years between 1976 and 1986.

This one is now also acknowledged appropriately more than two decades later: The most successful LP’s of the group around band leader and bass player Gunther V. Radny are now published in a remastered digipak version and enriched by bonus tracks, liner notes and rare photos on CD for the first time under the new banner of SPV/Steamhammer “Rare Classics”