Masterplan featuring former Helloween guitarist Roland Grapow have released another song from their upcoming new album PumpKings, which will be released tomorrow via AFM Records and which contains Masterplan‘s versions of Helloween songs co-written or written by Grapow. After releasing a lyric video for “The Chance” and the song “Escalation 666”, Masterplan have now released the song “Mr. Ego” (which first appeared on Helloween‘s Master Of The Rings album) for streaming. 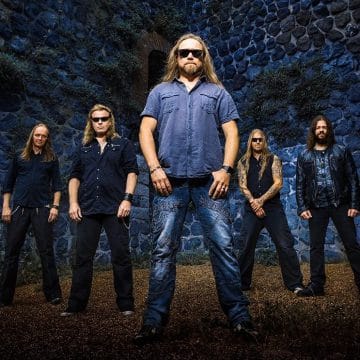 Sleaze Roxx stated the following in its review of Masterplan‘s PumpKings including the band’s version of “Mr. Ego”: “…upon listening to [singer Rick] Altzi tackle the [Michael] Kiske sung Helloween tracks, it became apparent to me that while the Masterplan versions of the Kiske sung Helloween songs are enjoyable and listenable, they pale in comparison to the original Helloween versions because it was Kiske‘s voice that often really carried those tracks. I am thinking in particular of “Step Out Of Hell” where Kiske‘s vocals really shined but where Altzi‘s gruff voice simply doesn’t do justice to the song. If anything, hearing Altzi struggle to sing the Kiske Helloween songs makes me appreciate just how much of a great vocalist that Andi Deris really is because Deris does not have Kiske‘s opera like high vocals but I never found that Deris fell short on any Helloween songs that he would sing live from the Kiske era.

That being said, I find that Altzi does a good job on at least two Kiske tracks — “The Chance” and “Music” — and really shines on a couple of Deris tracks — “Escalation 666” and “The Time Of The Oath.” Where Altzi‘s vocals fall short for the Kiske songs are on the aforementioned “Step Out Of Hell” as well as “Someone’s Crying” (which I can barely recognize) and “Mankind.” In terms of the Deris tracks, I find that Altzi simply isn’t able to capture Deris‘ magical story telling voice on tracks such as “The Dark Ride” and especially “Mr. Ego.” Aside from Altzi‘s vocals, another key difference between Masterplan‘s interpretation of the various Helloween classics compared to the original versions is that Masterplan have a full-time keyboardist in Axel Mackenrott so sometimes the Helloween tracks end up getting “Masterplanned” with the extra layer of keyboards throughout.”