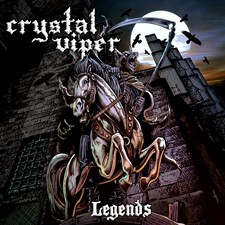 The album was recorded and mixed at the MP Studio in Poland, with engineer Mariusz Pietka and producer Bart Gabriel. “Legends” will feature several very special guests: Rhino (the famous ex-MANOWAR drummer), Stefan Kaufmann (U.D.O., ex-ACCEPT), Mat Sinner (PRIMAL FEAR, SINNER) and Sven D’Anna & Dano Boland (WIZARD). As the title suggest, all the lyrics will be based on the original Polish legends from the middle-ages.

Listen to the song at www.myspace.com/crystalviperofficial.