The lucky people in attendance at the Ultimate Jam Night feature at the Lucky Strike Live in Hollywood, California, USA on November 25, 2015 were about to witness history as Van Halen frontman David Lee Roth was scheduled to make a “surprise” live reunion with his solo band members — guitarist Steve Vai, bassist Billy Sheehan, drummer Greg Bissonette and keyboardist Brett Tuggle — that night. Unfortunately, the venue was closed down by a fire marshall at the last minute due to overcrowding. 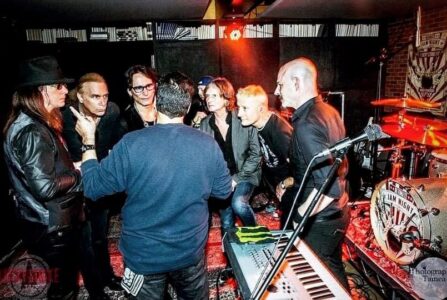 Drummer Matt Starr (Ace Frehley, Mr. Big, Black Swan) posted the following message in part on his Facebook page on December 2, 2021 about the reunion that was so close to happening more than six years ago:

“There is quite a story behind this photo. This is the night the original David Lee Roth band including Dave, almost reunited.

I was part of a weekly jam started by Chuck Wright called Ultimate Jam Night. The first show we did drew 400 people. Needless to say it was a much needed event in Hollywood at that time.

Early on Gregg Bissonette and Billy Sheehan came down to perform Shy Boy and a couple other songs. Afterwords, Gregg said he wanted to have the original David Lee Roth lineup including Dave reunite Thanksgiving week. We all said, “sure sounds great”. Not thinking l it would actually materialize.

A couple months later, everything was set and it was on. The word got around town. Our night that would do anywhere from 500 to 800 people suddenly had 2000+ people lined up around the building.

Last I heard we had about 1000 people in the building and the fire marshal showed up. Shut down the show and said everyone had to leave.

This photo was taken while the band was assembled on stage and just about to start playing despite the fire marshal‘s orders. Steve Vai said, “let’s just play and I’ll pay the fines”. The GM of the venue vetoed that idea as they would potentially be looking at being shut down for weeks or months.

In this photo, our production manager Adam Mandel was giving us the lowdown on everything and you can see the look on everyone’s face. I especially love Billy‘s face.