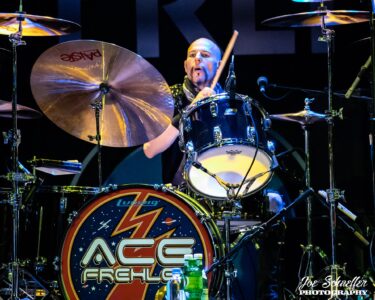 Daly noted that Starr had played on Frehley‘s recent solo albums Space Invader (2014) and Origins Vol. 1 (2016), and asked the drummer how he got the gig in Frehley‘s solo band. Starr replied:

“That was the first record I recorded with Ace. We’ve done three more since then and are currently working on the next one. I saw a press release from his former drummer saying he had quit. I got on the phone, made some calls, and got connected with the guys in the band. A couple of weeks later, I auditioned in New York, and a couple of weeks after that, I got the gig. It was a lot of fun because I had never done a gig where I was also singing lead. I sing several of the Paul Stanley KISS songs.”

In terms of how he landed the Mr. Big gig, Starr indicated: “Billy Sheehan saw me sitting at an open mic, and he came up to me and introduced himself. We stayed in touch, and then about a year later, when Pat Torpey was diagnosed with Parkinson’s, they knew they would need some help on drums, so he asked me if I was interested. And I was! I had the pleasure of working with the band and closely with Pat for five years. We recorded a record together and shot a DVD in Japan; I learned a lot from those guys and really loved my time with the band and especially Pat.”

You can read the rest of the interview with Matt Starr at Vinyl Writer Music‘s website.