A common occurrence it seems is for veteran hard rock or heavy metal acts to announce a farewell tour only to change their mind and continue touring many years later. KISS announced a Farewell Tour back in 2000 and are still touring in 2017. The Scorpions announced in 2010 that they were going to be doing a farewell tour but after two years of touring decided that they were not ready to call it a day and five years later, the band is still touring the world. 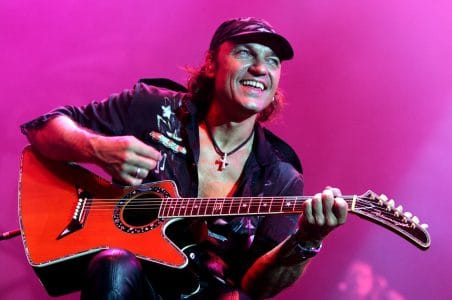 Scorpions guitarist Matthias Jabs was recently interviewed by AZ Central and spoke about the group’s farewell tour as he stated: “It was all influenced a bit by the manager we had at the time. We were asking each other, while traveling a couple weeks into the tour, “Who had the idea?” And we found out nobody in the band had the idea. I was thinking, “OK, my colleagues are a bit older than I am, seven to eight years.” But I was asking and, “No, not me.” We found out it was more pushed by the manager.

We thought, rationally, it might be a good idea to say “bye bye” while we were still in the best shape, leave the scene with the best impression and be remembered as a band that runs around like crazy. But seven years later, that still goes as well. We still run around like crazy. And we don’t look that much different.

So we postponed the end of everything and now we don’t know. We learned also that there is no point in saying, “This is the very last concert!””

In terms of whether there will be another farewell tour, Jabs opined: “No. No. That’s kind of stupid to announce it. And a lot of bands have done it. Finally… the First Farewell Tour, that’s how Phil Collins called one of his farewell tours. It’s getting a bit ridiculous when you say it and don’t do it, so we won’t do it again.”

You can read the rest of the interview with Jabs at AZ Central.