Balfour stated: “Yeah, we have tried to keep it consistent as best we can! Glad you noticed, dude! Yeah, growing up that is always something that frustrated me, many bands that I loved were a little lax in releasing new albums. Now that I’m in a band though I can of course understand how difficult it is to release them consistently, tours, other work, families, etc. etc. But I guess we feel 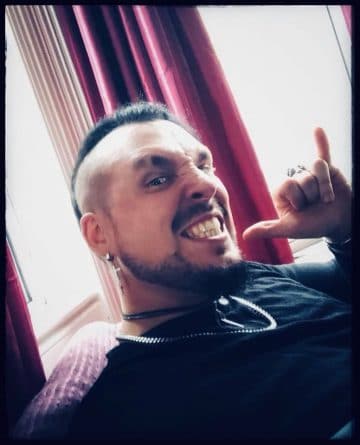 like we are slowly making waves with growing the band and carving out a Maverick fan base and unique sound. If we waited 3-4 years for a new album we may have forgotten or moved too far away from what Maverick is all about. Every band evolves, and if they don’t they will stagnate. A few bands like AC/DC don’t follow this evolutionary pattern, and it definitely works for them! Haha. If we release albums reasonably regularly then our sound will evolve naturally, organically and without extreme leaps, which will be more enjoyable for fans and will make any organic evolutions easier to get on board with!

‘Cold Star Dancer’ was definitely our shortest writing for an album. ‘Quid’ was the result of a couple of years of songwriting and juggling songs we’d written over a long period, whereas ‘Big Red’ was more rushed as we realized that now we had to write music with a timeframe. But the writing went very well! With ‘Cold Star Dancer’ we lost a key co-songwriter in our ex-drummer, Mike Ross.

So this time around me and my brother had to write the album ourselves. We had small contributions from Richie and Terry but the album is 99% us. So this was more difficult as the process had changed somewhat and also because there wasn’t the third creative mind to alleviate pressure when any two of us hit a brick wall. So it was harder work! Plus we went through line-up changes during the process which meant we had to cram.

We are unbelievably proud of the finished product, but next time around we will make an active effort to spread out the writing so that it is less stressful!”

In terms of the writing process for an album, Balfour advised: “During the year I record riff, vocal and melody ideas constantly on my phone. I use the voice recorder and hum ideas, haha! But I do this all of the time so we never have a shortage of ideas. The issue is making the ideas cohesive and come together, filling the gaps if you will. If you have a great chorus and riff but just can’t get a strong enough verse it can get quite frustrating, haha! My brother writes guitar riffs and parts year round himself, then we just get together periodically to try and flesh out and combine ideas. The problem with these sessions is that both of us need to be in the mood and reasonably happy for it to be fruitful! I’d say songwriting is 90% perspiration and 10% inspiration! Maybe even less! Haha!”

You can read the rest of the interview with Maverick frontman David Balfour at Melodic Music Reviews.

The Hard Rock heroes from Belfast Northern Ireland are back! This is the first single from their upcoming album “Cold Star Dancer”. It will be released world…