With the United States of America busy with the impeachment battle of its President based on the key words “quid pro quo”, how fitting that UK rockers Maverick are re-releasing their debut album Quid Pro Quo via Metalapolis Records.

The following message was posted in part on Maverick‘s Facebook page earlier today (with slight edits): 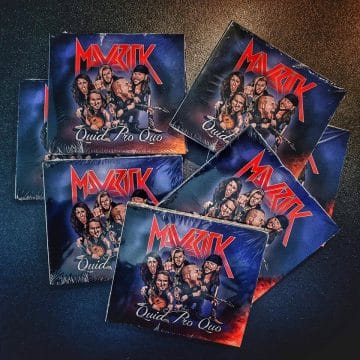 With BRAND NEW artwork to commemorate it’s release this day 5 years ago, get both albums in one package EXCLUSIVELY early at the H.E.A.T. Festival this weekend!

We’re onstage at 7PM this Sunday, and will be doing a signing session at 9:20PM where we will happily sign these brand new records!

Who would have thought when we released “Quid Pro Quo” 5 years ago on Massacre Records that we would end up here?

We toured with some great bands such as The Poodles, Treat, Crashdïet; toured with our label-mates Licence, Twentydarkseven & DeVicious and good friends Charing Cross!

Played numerous festivals such as Icerock, Rocknacht Tennwil, Rock The Ring, H.E.A.T. Festival to name a few, & shared the stage with some great bands at them. We’ve even played on a boat in the middle of a lake!

It’s with great pleasure that Metalapolis Records decided to re-release the album that helped set all this in motion, and we can’t wait to give you all early access to it at the HEAT Festival 2019 this weekend!”

Sleaze Roxx stated the following in its review of Quid Pro Quo: “In two short years, Maverick have gone from independently releasing a mini-EP to signing with an established record label to deliver their full-length debut. According to the dictionary, Quid Pro Quo means ‘something given or received for something else’ — in this case the young Irish rockers have given a fine collection of music, but aside from the admiration of a limited fan base, I’m not sure what they can expect in return.

We all love our ’80s metal — the days when hair was teased to the stratosphere, men raided the wardrobes and cosmetic cases of the nearest female, and the accompanying music that was outrageously overblown — and Maverick have that sound molded to perfection while steering clear of the ridiculous image. Not the fastest or heaviest band in the land, Maverick succeeds by lacing their songs with memorable guitar hooks and over-the-top choruses that are bursting at the seams with harmony.”

Maverick‘s “In Our Blood” video (from Quid Pro Quo album):

MAVERICK – In Our Blood Videoclip

This song is taken from the album QUID PRO QUO which you can get here:Amazon:http://www.amazon.co.uk/Quid-Pro-Quo-Maverick/dp/B00KYCU9VOhttp://massacre.music…