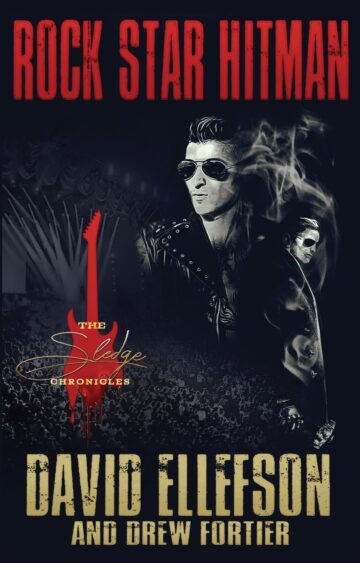 The Sledge Chronicles: Rock Star Hitman is the first chapter in the action-packed saga of Sledge; an up and coming musician who uncovers a startling quid pro quo: in exchange for achieving his dreams of Rock stardom, he must enlist as a ruthless killer for a clandestine agency. Filled with twists, turns, screams, and even laughs, Rock Star Hitman is the cult thriller you’ve been dying for.

Ellefson states, “I’ve been on a quest to create an original thriller fiction book for some time now, and I’m beyond thrilled to announce it with Rock Star Hitman. I wanted there to be familiarity to my fans in an almost autobiographical way, but with characters and storyline which are clearly fictional. I think metal and horror / thriller fans are going to like it!”

Adds Fortier, “David and I clicked really well when creating this story, because we’ve both lived the rock n’ roll tale ourselves. That’s why Rock Star Hitman starts out like an autobiography from almost any musician but then takes a sudden and unexpected turn into a world of suspense, dark humor, and bloody brutal situations. As a horror / thriller fan myself, we could almost write ourselves into our own story line. Plus, I think most everyone will relate to the daunting tales of selling one’s soul for a rock n’ roll aspiration… a story that in and of itself is close to me as well.”

The novel will be released through The Ellefson Book Co. imprint and was co-written with musician, filmmaker, actor Drew Fortier; known for his work with such artists as Bang Tango, Chuck Mosley (Faith No More), and Zen From Mars. Fortier also released his autobiography Dark, Depressing, and Hilarious in 2018.

Rock Star Hitman is currently up for pre-order at Barnes and Noble as well as Amazon and can be purchased in hardcover format, paperback, and ebook. (Links below)

Ellefson and Fortier are no strangers to collaboration; on top of their forthcoming novel they also have an independent found footage horror film due out in 2021 titled Dwellers which was written by, directed by, and starring Fortier with Ellefson producing alongside Thom Hazaert via their Ellefson Films imprint.