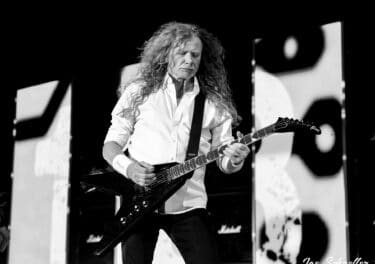 Megadeth drummer Dirk Verbeuren was recently interviewed by Andrew Daly for Vinyl Writer Music. Megadeth have a new studio album titled The Sick, The Dying… And The Dead!, which will be released on September 2, 2022. The band’s line-up also includes leader and frontman Dave Mustaine, guitarists Kiko Loureiro and bassist James LoMenzo. 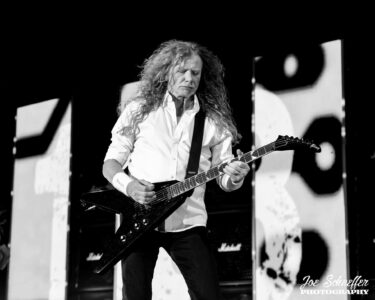 In terms of what is it about the current Megadeth line-up that allows the four of them to breed such inherent chemistry, Verbeuren indicated: “That’s a great question. I think we all just complement each other. You know, in a band, it’s always kind of an interesting dance between people’s personalities and people’s expectations. And when it comes to the musicianship, I think there’s no question that every single one of us in the band is capable of doing this stuff very well. But at the end of the day, it’s all about how you get along on the road, and the interesting thing is that we get along now better than we ever have in the six years that I’ve been in the band. I think we’ve really grown as a band together by listening to each other, and even by sometimes disagreeing, and then figuring out how to move forward from there.

We’ve really developed an understanding of each other’s personalities, and that’s really the key because you spend a lot of time together on the bus, the plane, and the train while on the road, so if you don’t get along, it’s gonna play out in ways that aren’t good. So for us, the band is always central, and the only thing we want to do is go out there and play the best shows we possibly can every single night. And that includes Dave because he still has a very deep passion for improving everything night after night, and for bringing the absolute top-of-the-line stuff that he can to his fans. I think that’s really inspiring for the three of us – for James [LoMenzo], Kiko [Loureiro], and myself – because Dave is not jaded in any way. Even after all these years doing what he does, he’s still got the fire. So yeah, I think it’s really about just listening to each other. I think that’s really the most important thing when it comes to getting along.”

Verbeuren was asked what was the most surprising thing that he has encountered in his six years with Megadeth. “It’s probably just how easy it is. What I mean by that is if you take the time to understand the situation, I mean, it’s obvious that when you go into a gig like this, you’re not sure what to expect. Having said that, Dave comes with a reputation that precedes him, but as it turns out, he’s a guy that has a huge heart, that’s always giving 110%, and that’s always doing his best to make sure that everybody in his camp is happy, treated well, and have everything they need. So going in, a lot of these thoughts that I had, I guess I would say it was more like a lot of the anticipation of how’s this is gonna be, they all turned out to be wrong. I found that out very quickly, and sure, some stuff maybe took me a little while to see, but my biggest surprise was really how easy it all is if you show up, be a good bandmate, do a good job, and come prepared. If you do that and show Dave that you’re one less thing to worry about, it really is very easy.

I mean, it’s really tough being a bandleader, and it’s especially tough when you’re a band leader in a big band like Megadeth that’s been around for many years, where the expectations are really high. Everything falls on Dave’s shoulders at the end of the day, like if something goes wrong, nobody’s gonna say, “Oh, it’s Dirk‘s fault,” you know? If things go wrong, it’s gonna be Dave’s fault in the public eye, and that comes with a lot of pressure, and a lot of stress. And so for me, being there and making life easier for him, and for the rest of the guys is the best thing that I can do. That’s what I aim to do every day that I’m on the road with the band or every day that we’re working together. So, that would be my biggest surprise, because I didn’t really fully understand that until I joined Megadeth.”

You can read the rest of the interview with Dirk Verbeuren via Vinyl Writer Music‘s website.