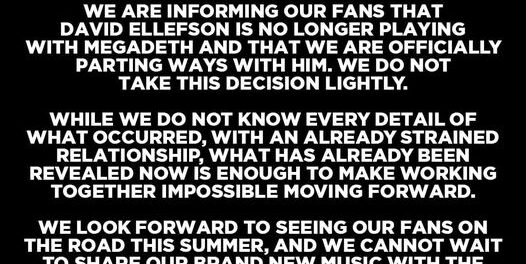 Big news in the Megadeth camp as band founder and leader Dave Mustaine has apparently chosen to part ways with bassist David Ellefson after some embarrassing videos got leaked of the bassist having some “adult interactions” with a 19 year old woman. 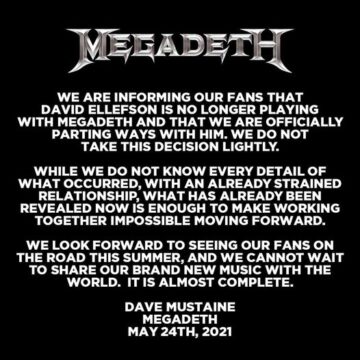 When Metal Sludge first publicly reported the news earlier this month, Megadeth issued a statement with they were monitoring the situation.

“We are informing our fans that David Ellefson is no longer playing with Megadeth and that we are officially parting ways with him. We do not take this decision lightly.

While we do not know every detail of what occurred, with an already strained relationship, what has already been revealed now is enough to make working together impossible moving forward.

We look forward to seeing our fans on the road this summer, and we cannot wait to share our brand new music with the world. It is almost complete.

Ellefson was in Megadeth from 1983 to 2002 and again from 2010 to 2021, although he was reportedly a salaried employee during his second stint in the band.