The Covid pandemic strikes again as various restrictions imposed by the Canadian province of Quebec coupled with international logistical issues have forced Megadeth to postpone their three Canadian dates of their North American Metal Tour of The Year. Megadeth and Lamb of God are co-headlining their Metal Tour of The Year along with openers Trivium and Hatebreed. 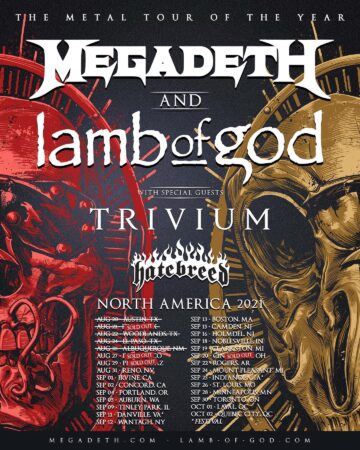 The following message was posted on Megadeth‘s Facebook page on September 24, 2021:

“The final three shows of the Metal Tour of the Year in Toronto, Laval and Quebec City will unfortunately be postponed to Spring 2022 due to restrictions in the Quebec province and international logistical issues. Please hold onto your tickets as they will be valid for the new dates as soon as they are announced.

See you tonight in Mt. Pleasant and we look forward to wrapping up this leg of the tour on Sept 28 at the sold out show at The Armory in Minneapolis, MN!

Sleaze Roxx stated the following in its review about Megadeth‘s performance at the Moda Center in Portland, Oregon, USA on September 4, 2021: “Dave Mustaine’s never been a traditional vocalist. He’s more of a ‘snarler,’ but you knew that. Having said that, his voice is about what it’s been over the course of the past three to four tours. Surprisingly, Mustaine’s voice improved two to three songs into the set, which was amazing, considering the rough vocal start. And James LoMenzo? He’s seamlessly slipped back into the line-up, like he’s been in the band for the past decade. What’s different about Megadeth on this tour, possibly influenced by LoMenzo’s return, is that everyone is mobile and moving across the stage. There’s choreographed poses ala KISS, Judas Priest or Accept. It’s different given the band members have for the most part stood in the respective spots on the stage. It wasn’t expected. The addition of the LED screens playing footage corresponding to the song performed or music video footage, was an excellent enhancement to the live performance.”