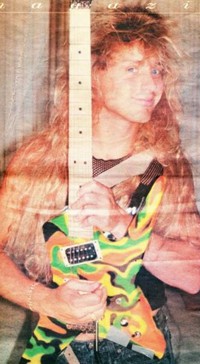 Brad Hardisty of The Nashville Bridge reports that Parrish Hultquist, ‘Utah’s Greatest Guitarist’, has died at the age of 48.

When Parrish Hultquist started playing out at about age 15, Utah had no idea what they were in store for. After first tracking at Bonneville Studios for a band called Equinox, he started developing his songwriting with Adrian Scott and Brad Hardisty in Roxx. Within a few short years, he was out performing originals with Moviescreen that put out their first album in 1984.

By the time Moviescreen started playing at The Generation Gap, Parrish’s lightning speed and interesting chord changes set him apart from what was available at the time in Utah. Parrish was learning from just about every imaginable influence from early Ritchie Blackmore, Eddie Van Halen, Randy Rhoads to even Jazz artists like Al Di Meola and Allan Holdsworth. If he heard it, he could play it.

During the early 80’s he challenged himself to study classical nylon guitar only to find out that his teacher from the University of Utah had taught him everything he knew in six months. Anything that he would challenge himself to do on the guitar he could accomplish. He was a guitarists’ guitarist.

Parrish excelled in his abilities and quickly became bored or disinterested if the band he was in was not up to pushing as fast as things should be, reached a plateau or could not see his vision. Most of the time Parrish was the only guitarist in the band, but, those that were fortunate enough to share the stage with him found it to be an exhilarating experience.

Parrish took guitar seriously and was not up to sharing the stage with somebody he would consider subpar. Probably, the most successful band that Parrish performed with was Megattack with the dual guitar attack of Parrish Hultquist and Jay Gough. They played regional shows from Salt Lake City to Boise, Idaho with crowds of a 1000 or more, their album “Raw Delivery” took off in Europe just as the band broke up.

Parrish played in numerous projects in the late 80’s, such as Terra’s album Flames of Passion (out of print) featuring brothers Dana and Kevin Freebairn and early 90’s, most notably Wolfgang who played regularly in Salt Lake City and played tour dates opening for bands such as Extreme and Tesla. Wolfgang recorded several unreleased tracks and a few videos that can be found on YouTube nowadays.

Parrish created a lot of buzz as a guitarist and garnered compliments from other contemporaries such as Michael Schenker and George Lynch. He started to appear on Metal Fanzine covers as the next big thing or the Intermountain Music Scene secret weapon. It would be a fact that Parrish would not have a problem with tangling with any guitarist on stage doing anything from Metal to Jazz to Classical Music. He was an accomplished musician who studied everything he could get his hands on.

Parrish began to have medical issues, a very rare seizure problem in the mid 90’s that began to slow down his ability to perform. He took whatever energy he did have to creating demos off all of his song ideas in his home studio and took opportunities to record with friends.

In 2005, the opportunity came to record with the original Megattack line up and a follow up to Raw Delivery called Save The Nations was recorded. The album was professionally mastered at Airshow in Colorado. Parrish put as much as he could into his songwriting and playing. He was constantly dealing with seizures although he was grateful to have the opportunity to record again and perform on stage in Salt Lake City. Although medical issues would keep him in Spokane, Washington where his family lived and he received medical attention, Parrish was grateful to perform saying finally his daughter, Taylor, was able to see him perform with the band that garnered so much success in the 80’s.

One time he was riffing away at a visit to Guitar Center in West Valley later in years when a Salesman was blown away and asked if he had ever heard of Parrish Hultquist, that his Dad use to hang with him and he was considered the best guitarist to ever come out of Salt Lake City. He finally busted up a little and explained that he was Parrish.

If Parrish respected you as a musician or a person he was a lifelong friend. While he had a hard time with people that were not what he considered real, judgmental or honest, he was ready to include those that Parrish could tell were on the fringes whether they were shy, handicapped or otherwise feeling left out. He had a sense of humor and a personality that would light up the room or the face of a girl working as a Checker at the Grocery store. If he wanted to engage you in conversation or merriment there was no stopping him.

Parrish never made the natural choice to go out to the LA scene in the 80’s. He loved Utah, Idaho and Washington State. He never wanted to be too far from his family. He was the oldest brother of eight children. The last several years with his health problems he was never far from his Sisters and his Parents in Spokane, WA.

Parrish was preceded in death by his younger brother, Shawn Hultquist, who had heart problems and while waiting for a heart donor died in 1998. His mother Gay Lynn Saunders also passed away a few years ago. The surviving family, his father Ron, Stepmother Jacque, Travis, Rome, Shelly, Stacy, Ronnie, Tracy as well as Cory and Billy are gathering for a Memorial over the next few days. His engaging personality and talent will be sorely missed but warmly remembered.