Unfortunately, the difficulties experienced by the upcoming Melodic Rock Fest scheduled to take place at The National Theatre in Melbourne, Australia from March 6 to 8, 2020 are continuing as the headliner FireHouse has pulled out. This follows the cancellations of Eclipse, Crazy Lixx and Paul Laine in the last eight days or so. 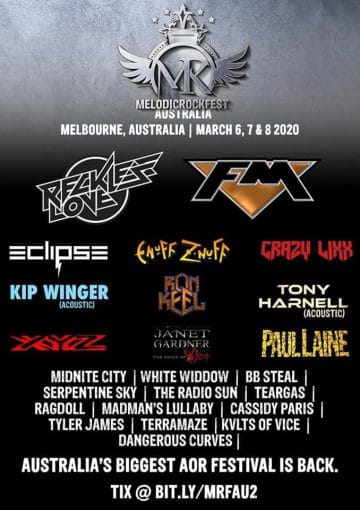 “FireHouse is extremely sad to inform our fans that due to contractual obligations that were not met by Melodic Rock Fest, we will regrettably have to cancel our MRF performances in Australia.”

It strongly appears that the show will go on though as Melodic Rock Fest has released a new poster without FireHouse and there are many international acts that have confirmed that they are either on their way to or already in Australia including Reckless Love, Ron Keel, Janet Gardner, Midnite City and Enuff Z’Nuff.

While many people associate Melodic Rock Fest with Melodic Rock website founder Andrew McNeice, the reality is that the man is not involved anymore in organizing and running Melodic Rock Fest concert events as he recently indicated in a Facebook post less than 24 hours ago:

“I would just like to address the topic of MelodicRock Fest Australia.

The MRF name was sold off by myself over a year ago. I had already declared a total lack of desire to do any more live events anywhere, so when the offer came to take over, it seemed like a good idea. It seems some are still not aware of this fact.

I was retained as a consultant for general aspects of the event, along with recommending and introducing artists and agents to the new MRF guys.

I do not have any financial stake in this, nor any control over the event. I have seen problems arise at a number of events around the world. It unfortunately happens and I trust the team to do the right thing by everyone on this occasion.

It is beyond the understanding of most what it takes to put on an event like this and the team behind it have been putting everything possible into making this particular event a success, with a view to making it an annual event alongside others. It takes a lot of determination, energy and guts to put on any event, but especially a multi-day, multi-band one such as MRFAU.

I am really sorry to see unhappy fans and it is my every wish that things get sorted for this weekend coming and those in attendance can once again be witness to some of the best bands in this scene.”